Bal Gangadhar Tilak was an Indian Freedom fighter who played a pivotal role in the freedom struggle.

The Trio of “Lal Pal Bal” were forerunners of the freedom struggle much before the times of Mahatma Gandhi. Lal was Lala Lajpat Rai from Punjab, Bal was Bala Gangadhar Tilak from Marartha, and Pal was Bipin Chandra Pal from Bengal. They came from different corners of India and asked for Swaraj in united voice.

Tilak was born on 23rd July 1856 at Ratnagiri village of Maharashtra. His father was a Samskrt teacher.

A first cover of Tilak’s Birth Centenary issued in 1956

Tilak was among the first generation of Indians who secured a graduation.

In 1871, Tilak married Satyabhamabhai. He began teaching mathematics at a private school.

According to Tilak, spirituality was not divorced from worldly life. He got his inspiration from the Bhagavad Gita, which he believed taught selfless service to humanity.

He said, “I regard India as my Motherland and my Goddess, the people in India my kith and kin, and loyal and steadfast work for their political and social emancipation my highest religion and duty.”

Bal Gangadhar Tilak Was imprisoned in Mandalay Jail, Burma From 1908 to 1914. During his imprisonment in Mandalay, he wrote the book titled Gita Rahasya. 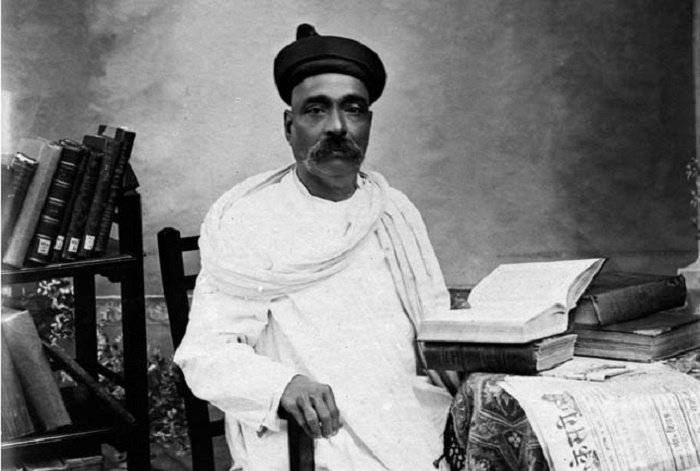 Later he went on to write a commentary on the work called the Bhagavad Gita Rahasya.

Making social service the goal of his life, Tilak founded the ‘Deccan Education Society’ along with his college friends in Pune, with the aim of improving the quality of education in India.

Tilak joined the Indian National Congress in 1890 and became a part of the Freedom struggle. His main aim was to unite the people against British. He worked with Mohammed Ali Jinnah in the Home Rule Movement.

He was soon conferred the title of ‘Lokamanya’, Loka meaning, ‘world’ and Manya, ‘acceptance’, as he was accepted by all sections of the society as their leader.

Father of the Indian unrest movement

He was called the ‘Father of Indian unrest movement’ by the British for his successful attempts in uprising the masses towards freedom.

Along with Bipin Chandra Pal and Lala Lajpat Rai, two other freedom fighters, Bal Gangadhar Tilak became a part of the trio who were collectively nicknamed, ‘Bal Pal Lal.’

In 1894, Tilak called for celebrating the domestic Ganesha festival as public event. His intention again was to unite people through the fervour of the festival.

‘Swaraj is my birth right’

“Swaraj is my birth right and I shall have it.”

This slogan is ingrained in the Indian consciousness even to this day. A stamp has been released by the Government to this effect.

Tilak’s call intensified the yearning for Swaraj from the British, in every common man’s mind as well as collectively in the entire population of the land. It became a turning point of our Freedom movement.

In 1905, following the partition of Bengal, He encouraged the Swadeshi and Boycott movements.

At this moment, he also began his journalistic career by founding the newspapers Kesari and Maratha. Tilak opposed the many policies of British by publishing strong worded articles in his papers. Kesari and Maratha became the voice of the freedom fighters. 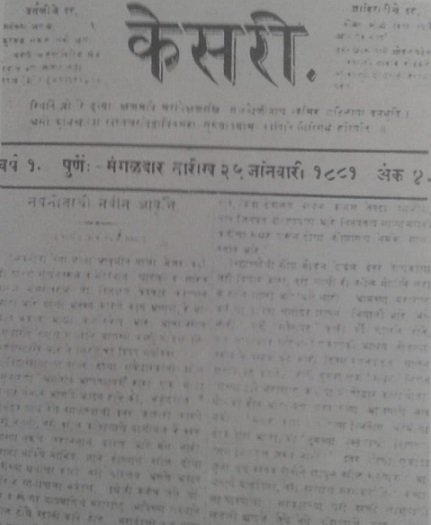 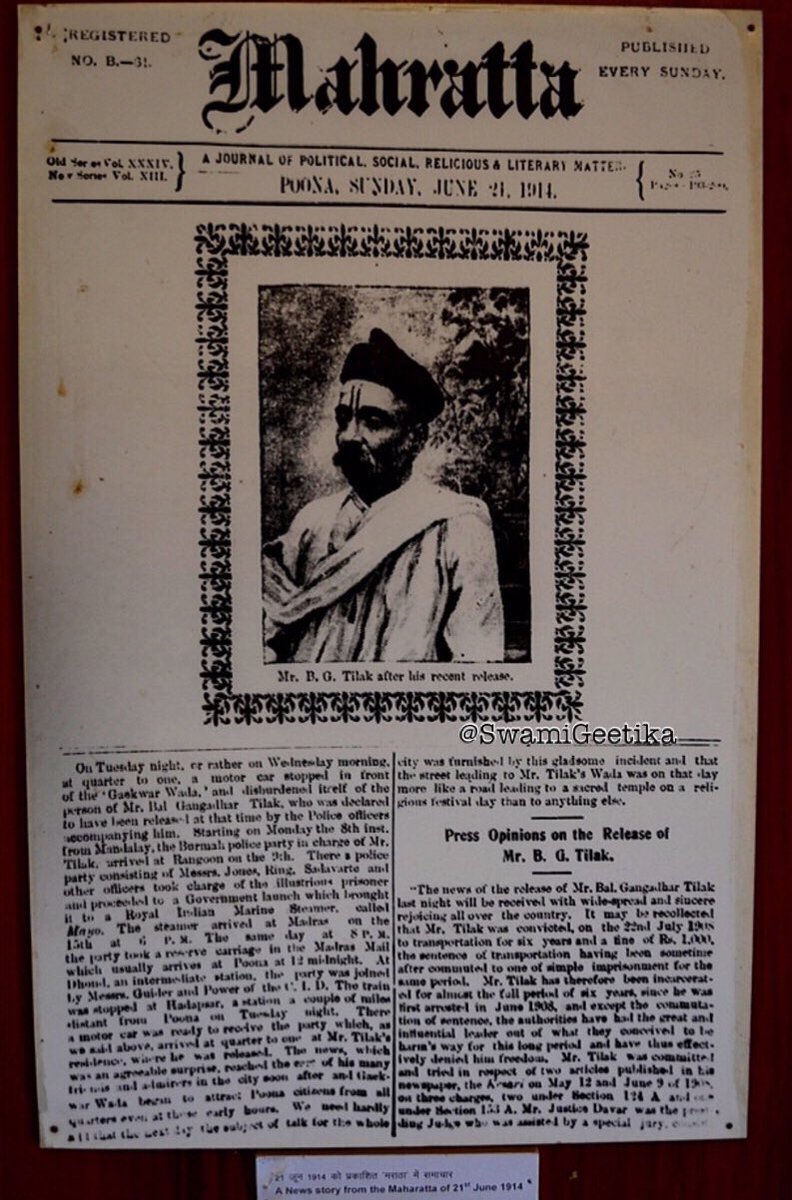 Tilak was sent to jail for carrying out anti-British activities. Here, he spent his time in writing the commentary on Bhagavad Gita. He also authored a book called “Orion, or the antiquity of the Vedas”, which is a research on the antiquities of the Veda.

All in all, Tilak paved the way for Mahatma Gandhi, as the momentum of his activities helped Gandhi to start his non-cooperation movement. In this regard, Gandhi considered Tilak his Guru.

Tilak passed away on August 1st, 1920 in Mumbai. A true devotee of Bharath in true sense of the word.

Last words of Lokmanya Tilak on verdict of Jury in 1908, is on plaque outside Central court of Bombay High Court 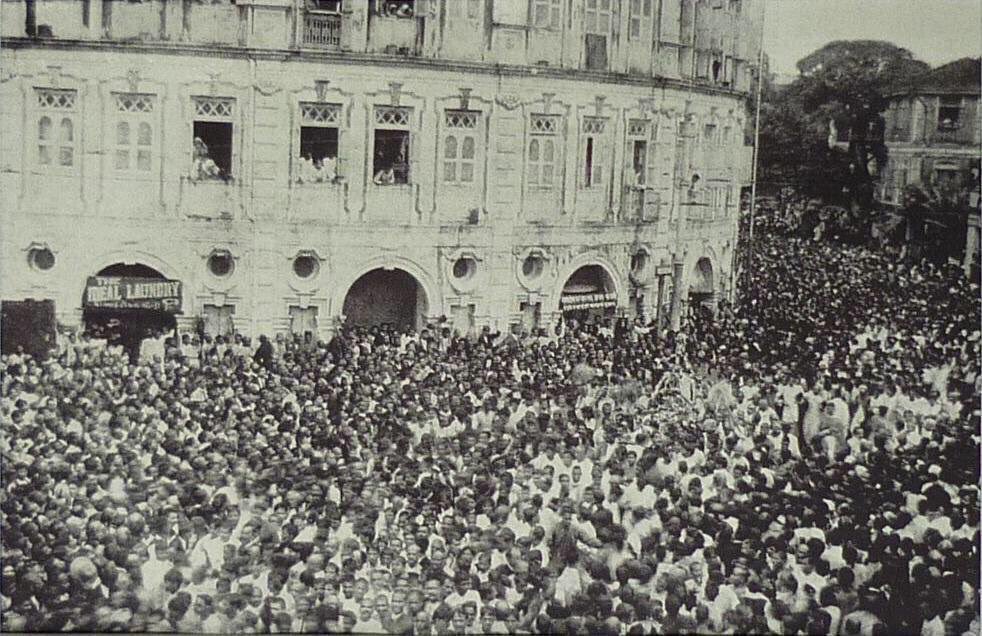