On 5th July 1943, Azad Hind Fauj came into force, Azad meaning Freedom, Hind refers to India and Fauj is Army. This Army, also known as Indian National Army was formed by Netaji with the aim of getting freedom for India, from the British Rule.

Netaji Subhash Chandra Bose was freedom fighter who is today proudly remembered for the key role he played in the Freedom struggle.

In 1943, Bose regrouped the Indian National Army, INA, with the help of the Indian soldiers, from among the defeated British Indian Army in Singapore.

Netaji Bose with members of the Indian National Army – INA Hoisting the flag in Manipur

He then marched through South East Asia reaching Moirang in Manipur.

In Manipur, he hoisted the Indian Army flag the Azad Hind Fauj, for the first time on Indian soil, on April 14, 1944, defeating the local British Army.

The place where the Indian Tricolour was hoisted for the first time on Indian Soil, Moirang, Manipur INA War Museum, Moirang

Netaji Bose was the one, who with an army of dedicated freedom fighters gave a chill down the spine of the British Empire. 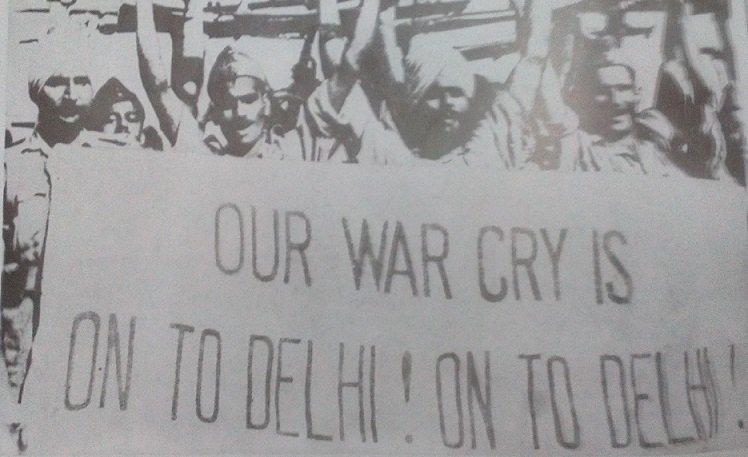 The Unarmed and Armed approaches of the 1940s

While all these factors cumulatively kept building up India’s struggle for freedom for over 100 years, the Quit India Movement and the INS’s Chalo Delhi march, were the ones to dominate the 1940s, when India decided to go both the armed and unarmed way to seek its freedom.

The Gandhian freedom struggle using Civil Disobedience as a tool based on the principles of Ahimsa and Satyagraha and the ensuing Quit India movement, created a lot of international opinion against colonial rule.

It was a movement where, the masses arose in a non-violent uprising to express their resentment at the of British violence if push came to shove.

It was a silent and enduring resistance from the valiant, but common, unarmed people.

Parallel to the Civil Disobedience Movement happening within the country, was the Indian National Army under the leadership of Netaji Subhash Chandra Bose which was marching towards India from the East with a sizeable army.

The INA was not an unorganized, rag tag army. It was organized, disciplined, well trained and well equipped with armaments. It had war chests to fund its armed struggle, pay the salaries and maintain the supply of arms. One such war chest amounted to some 100 kgs of gold, of which, 11kg worth of treasure are deposited at the National Museum, New Delhi.

The INA was not an unorganized, rag tag army. It was organized, disciplined, well trained and well with armaments. It had war chests to fund its armed struggle, pay the salaries and maintain the supply of arms. One such war chest amounted to some 100 kgs of gold, of which, 11kg worth of treasure are deposited at the National Museum, New Delhi.

It had a slogan Chalo Delhi

It had a flag to be hoisted on freedom.

It had a marching tune Kadam Kadam Badaye Ja

It had stamps, designed and ready to be issued after freedom.

It had a currency, designed, printed and ready for use after freedom.

It had established a new bank – Azad Hind Bank i.e. Bank of Independence, for a free India.

It was widespread all over India from Baluchistan to Bengal, from Kashmir to Kanyakumari.

It had Baluchis, Punjabis, Tamilians and everybody from all across the land.

It had men and women in its force and medical professional in the form of doctors, nurses etc.

It had the whole army apparatus built to fight the British and it was both ready and functioning.

Netaji Subash Chandra Bose of the INA too was not a randomly appointed leader. He was deep rooted in the ongoing freedom struggle in India and was also looking at various ways to overthrow the British rule, with his band of followers.

The INA obtained support from Indians and other nationals in Japan, Singapore, Malaysia, Thailand and Burma, among other countries in South East Asia. For, these were all facing the oppression of the British too and were looking at ways to weaken the British colonial stranglehold over the world. In addition, Netaji also received support from Austria, Germany, Russia, which were all fighting against the British in the 2nd World War, that was raging on at the same time.

All of which made Netaji Subash Chandra Bose and the INA be viewed as radicals, both by the British and those in India, who were against an armed struggle.

If the British could take the support of Indians in quelling unrest in their other colonies or to fight their wars elsewhere, how does INA taking support from other lands, make it radical?

At the Tripura Congress of the Indian National Congress (INC) in 1938-39, Bose made a dramatic entry on an elephant even though he was unwell and had high fever that day.

Netaji Bose was elected officially as the President of the Indian National Congress, defeating the nominee of Mahatma Gandhi, Dr. Pattabhi Sitaramayya from Andhra, going to show the clamour amongst Indians too, for an armed struggle against the British.

Netaji Bose was therefore a well-established leader, feared by the British, popular among the masses of India, who were looking for a saviour, equally accepted internationally, by the oppressed lands.

So, INA was not a random, impulsive grouping, but a strategically planned, wholesome and effective movement.

It was a resilient and steadfast resistance from valiant, trained and armed Indians.

Unfortunately after independence, while Pakistan recognized the contributions of Azad Hind Fauj, and honoured the soldiers by taking them in their same ranks in newly formed Pakistani Army, India rejected the Fauj, and dismantled it. This was a major blow to the morale, patriotism and sustenance, livelihood, of soldiers who sacrificed their lives for the freedom struggle. A major blunder on the part of the the then Indian National Congress Nehru government.

This day let us remember the contributions of our soldiers under Azad Hind Fauj, who fought for the cause of India’s freedom, without any monetary gain or recognition.