Swami Vivekananda, the patriotic saint of India was born on January 12th 1863 as Narendranath Datta in Kolkata, to Vishvanath Datta and Bhuvaneshvari Devi. From childhood, Narendra was inclined towards spirituality. He used to meditate in front of images of deities.

Narendra joined the Ishwara Chandra Vidya Sagar School in 1871 where he had his education until 1877, when his parents moved to Raipur. In 1879, his parents returned to Kolkata, where he joined the Presidency school and completed his matriculation. He studied Western Philosophy and European history for his graduation at the Scottish Church college and secured a Bachelor’s degree in Arts, in 1881.

All through his teenage, Narendra was never disconnected from his spiritual interests. He was an avid reader who was interested in Indian scriptures. He was a keen reader of Veda, Upanishad, Purana and Bhagavad Gita and other scriptural texts.

He was also interested in other subjects ranging from science, history art and politics to literature and social science.

Narendra was introduced to Sri Ramakrishna, in 1881. After having a profound spiritual experience with the master, Narendra accepted Ramakrishna as his Guru. He was greatly influenced by Ramakrishna’s life, experiences and teachings.

After Ramakrishna’s death in 1886, the burden of carrying forward His mission fell upon Narendra.

His leadership was vital in guiding other disciples of his Guru, through the rough patch that they were facing after Ramakrishna’s leaving the mortal coil.

Narendra converted a dilapidated house at Baranagar, Kolkata into a Math for him and other disciples of Ramakrishna to stay.

From 1888 to 1893, he travelled across the country, to realize his dream of reviving the glory of India.

Journey from Kashmir to Kanyakumari

In 1890, he began a ‘Bharat’ yatra from Kashmir to Kanyakumari on foot. He was given the tag of ‘Wandering Monk’ for his constant travels for restoring India’s spiritual heritage. He travelled to Rishikesh, Haridwar, Dehradun, Srinagar, Nainital among other places in the Himalayas.

In 1891, Narendra traversed through the western landscape of the country. He visited Ahmedabad, Girnar, Kutch, Dwaraka, Indore, Pune and a list of other places, furthering his cause of restoring the lost heritage of this land.

All through his travels, he spread awareness on the richness of Indian culture and spirituality among the masses who had lost their self-esteem during the colonial rule.

He gave a series of discourses at different places and conducted meditation and scriptural study for the people.

He finally arrived in Kanyakumari on foot, where he meditated at the rock, which is now called the Swami Vivekananda Rock Memorial. It is here that he penned his vision of One India, known as his ‘Kanyakumari Resolve’.

“At Cape Camorin sitting in Mother Kumari’s temple, sitting on the last bit of Indian rock, I hit upon a plan. We are so many sanyasis wandering about, and teaching the people metaphysics—it is all madness. Did not our Guru say, ‘An empty stomach is no good for religion?’ We as a nation have lost our individuality and that is the cause of all mischief in India. We have to raise the masses.”

Narendra’s visit to Chicago in 1893 and his speech there was an important landmark in raising the masses of his own country. His speech at Chicago conference on September 11th, in 1893 was only for 6 minutes consisting of 887 words, but what he stirred up with that has been echoing across continents for 120 years and will continue to echo for centuries to come.

This short speech recreated an interest about India in the west, in the 20thcentury. It also helped Indians discover Swami Vivekananda and through him discover themselves, the strength of their tradition, culture and the respect for their own spirituality. The awakening of Indians among the American intelligentsia had resonance back in his homeland in India.

This strength later paved the way for the Indian independence movement which was fulfilled in 1947.

This speech also gave impetus to Indian yoga and spirituality. Today, yoga is a thriving industry in the west but its seeds were laid by Swami Vivekananda in the west.

This momentous speech catapulted an unknown swami of the orient to become one of the most powerful thought providers.

After this speech, Swami Vivekananda was invited to given speech at different places abroad. He used these opportunities to create interfaith awareness about India’s spiritual heritage.

Returning to India in 1897, Swami Vivekananda went about his task of establishing the Ramakrishna Mission, a volunteer based philanthropic organization, with full vigour. The Mission was inaugurated on May 1. 1897.

He established many Ramakrishna maths through the country. The seed that was sown by Vivekananda has now grown into a huge tree with innumerable branches of Ramakrishna Mission in every nook and corner of India and also the world, spreading the light of spiritual knowledge.

The magnanimity and devotion of Narendra can be seen from the fact that he refused to use his name for the Mission, but instead chose to spread his Guru’s name. He followed this as a principle through his life.

Swami Vivekananda passed away on 4th July 1902 at Belur, Kolkata .

Like Adi Shankaracharya who lived for 32 years, Vivekananda in a short span of just 39 years revived the spiritual and cultural heritage of this land. It could be safely said that, it was through Swami Vivekananda that, Indians were inspired to rediscover themselves, their culture and traditions.

Swami Vivekananda was also the inspiration behind the setting up of the Indian Institute of Science, Bangalore, as can be seen from this letter, written by Jamsetji Tata, from the year 1898. 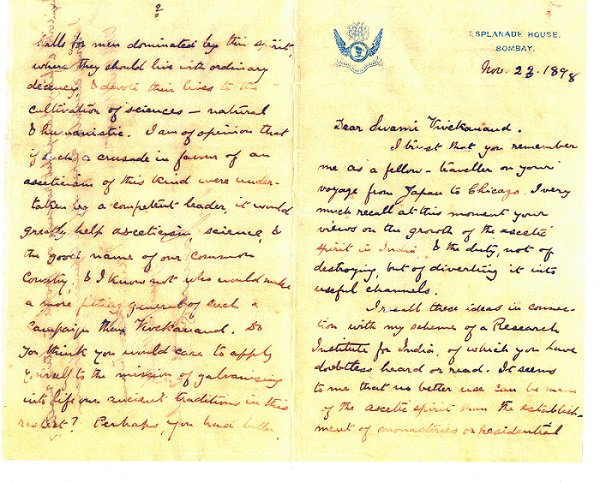 Swami Vivekananda inspired many youth through his life and continues to be an inspiration for the youth of this country, to this day. His birthday is rightly observed as ‘National Youth Day’ every year.

One thought on “Swami Vivekananda”