National Flag Adoption Day is celebrated every year on 22nd July, the day when the flag in its present form was official accepted by the Constituent Assembly in 1947, as the Indian National Flag.

The word flag in English means something that flaps in air. This word has its origin from the German word, Flagge, and dates back to the days of Tutons.

Some Vexillologists are of the opinion that China is originally the birthplace of the flags, and the first mention of it is dated to 1122 BCE.

India has had a long history of flags. In ancient India, each kingdom had its own flag, own identity.

In Samskrt, a flag is known as Dvaja.

In the Ramayana, we have Surya Vamsa Dvaja, of Rama’s dynasty, dating to 5100 BCE.

The chariots of kings, princes and soldiers hosted their own individual flags. Infact during the war, the flag of the chariot helped the rival army identify a particular soldier.

Arjuna’s flag had the insignia of Hanuman, a Vanara, through which the other soldiers identified His chariot during battles.

Arjuna’s Dvaja with the image of Hanuman

Similarly Bheeshma’s flag had the insignia of a Tala, Palm tree and 5 stars.

Dronacharya’s flag had the insignia of Vedika – an altar, Deer Skin, Kamandalam – a Pitcher and a bow.

Duryodhana had a snake in his Dvaja, a Sarpa Dvaja.

For each nation, flag represents its unique identity, the country’s pride.

In this land, each Divinity also has its own flag.

The Dvaja of Indra, the King of Deva is mentioned in the Rig Veda, which dates to earlier than 3100 BCE.

A Sculpture of Indra which shows his flag

In ancient times, Indra Dvaja Mahotsava was celebrated for 4 days after every successful military campaign.

Of the 8 modes of recitation, Ashta Vikriti that evolved in this land, Dvaja Pata is one.

Dvaja, a flag has been a part of the temple architecture from time immemorial. Dvaja stamba can be found in all temples.

For each nation, flag represents its unique identity, the country’s pride.

“Damage to dvaja is sacrilegious and the offender has to repair it or pay damages of 500 pana.”

There were a varieties of flags associated with different empires in the pre colonial era.

In the 18th and 19th century, India was under the British rule. Every Indian state had its own flags as it has been having from time immemorial.

After the First War of Independence in 1857, the idea to have a common flag for India was mooted by the British. The first group of flags based in British symbols was called the star of India.

In the 20th century, as the freedom struggle gained momentum, many flags were created by Indian freedom fighters with symbols unique to Indian identity.

The partition of Bengal in 1905, gave birth to a new flag, called the Vande Mataram flag, aimed at uniting people of different caste, creed and community.

In 1907, Madam Bhikaji Cama tore her sari and unfurled it as a flag at Stuttgart Congress, Germany. The design and colour of her saree was adopted in a modified Vande Mataram flag, with a few changes.

In the year 1921, Gandhiji asked a person from Andhra Pradesh by name Pingali Venkayya, to design the flag.

Venkayya designed this flag of 3 colours, white on the top, green in the center and red at the bottom, with a Charka, a spinning wheel in the middle. It was popularly known as the Charka Flag.

This Flag was first hoisted on December 31, 1929, at the Lahore Congress Session on the banks of River Ravi, in Punjab, by Pandit Jawaharlal Nehru. It was under this flag that Gandhiji declared our goal of freedom movement as “Purna Swaraj”, complete independence.

It was this flag, designed by Pingali Venkayya from Andhra, which became the basis for the Indian National Flag later. The Charka changed into Dharma Chakra – wheel of Dharma and the red colour at the bottom became saffron at the top,  with white in the middle and green at the bottom.

In 1931, The Indian National Congress adopted an official flag called the Swaraj flag which was used until 1947. The flag had three colours representing all the three main communities with a Charka in the middle. The aim was to unite all communities.

The Azad Hind movement under Subhas Chandra Bose which represented the provincial government of a free India had their own flag from 1942 to 1945.

From Charka to Chakra

Suraiya Badruddin Tayabji from Hyderabad, was an Indian Civil Service officer in the Prime Minister office in 1947.

She designed the present Indian National Flag with Chakra, from the Charka flag that Pingala Venkayya had earlier designed.

The Charka was replaced by Ashoka Chakra in the centre.

Before Independence, a committee was formed under Dr. Rajendra Prasad to decide upon independent India’s National Flag.

This Chakra Flag was approved, accepted and adopted in its present form during a meeting of the Constituent Assembly held on 22 July 1947, and it became the official flag of the Dominion of India on 15th August 1947.

“This flag that I have the honour to present you is a flag of freedom, not only for ourselves, but for all those who see it.”

“The flag represents a message of freedom and comradeship, a message that India wants to be friends with every country of the world”.

“This flag is of Indian independence.”

“Behold it is born. It is already sanctioned by the blood of martyred youths.

I call upon you gentle man, to raise and salute this flag of Indian independence.

In the name of this flag, I appeal to all lovers of freedom, all over the world,

to cooperate with this flag in freeing 1/5 of the human race”. 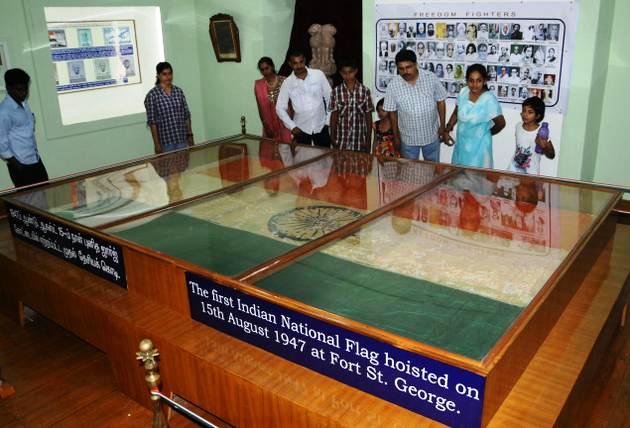 The flag satisfied the four major communities, namely Hindu, Christian, Muslim and Buddhist, as each of the three colours, saffron, white, green and the symbol Ashoka chakra, represented the respective communities.

Colours and Chakra Represent our ethos

This colour has denoted Sacrifice. It denotes the sacrificing mentality of service, Seva, which was exemplified by the Sadhu and Rishi of this land, who had sacrificed personal comfort for the larger benefit of the world and its inhabitants. This saffron colour has been associated with these Sadhu and Rishi from timeless eons. Over time, it therefore has also come to be associated with Spirituality and the Hindu religion.

This colour in the flag stands for Peace, the principle which India has stood by from the time that the Veda were first composed, for the Veda conclude with the Shanti Mantra – Om Shanti, Shanti, Shanti – Let Peace Prevail.

This band stands for the fertility and prosperity of the land, which India had in abundance.

The blue chakra, called the Dharma Chakra in the centre, denotes the qualities that govern the people and society of this land.

The tricolor flag of India thus conveys an image of a flourishing, prosperous, peace loving, friendly nation with people who abide by the principle of Dharma and are ever ready to be of help to all.

These are the basic reasons for the choice of these colours in the Flag.

Apart from this, these colours have inspired various thinkers and poets to ascribe further meanings for the tricolor, from the point of view of the needs of the times.