The word “Jagat” stands for the world, the Universe. It means that which is always moving and not stationary”. Nath means “Lord”. Jagannath is the Lord of the Cosmos.

Indians knew the cosmos is moving

The meaning of the word Jagat referring to the cosmos indicates that the people of India knew that the cosmos was always in motion.

Infact, the English word “Juggernaut” meaning “that which is huge and is rolling” comes from the word “Jagannath”.

One of the ancient and important cities of the east coast of India is Puri, which is in the present day state of Orissa. This Puri is famous for the temple of Jagannath, another name for Krishna.

The Physical Remains of Krishna

The idol in this temple is carved out of Neem wood from a particular forest and once every 12 years, is replaced through a strict, well defined process, Naba Kalebara, that has come down as a tradition.

Legends talk of people who came east from Dwaraka, carrying with them, mortal remains of Krishna, pinda, which have been kept in a hollow cavity in the idol since the times of inception of this temple to this day.

Neither has this been kept a secret nor has it been hidden. It is well known through the land as retold by the Sthala Purana, local legend of the temple. These remains were not tucked away, way back in time and forgotten. Around every 12 years, on the assigned day, this bundle, Brahmapotli, has been removed and transferred to a fresh idol under due rituals.

The bundle with the remains is normally physically handled by the most aged priest of the temple, who is blindfolded – a rare honour indeed to be that senior most priest on that occasion. Having handled these remains, the aged priest looks forward to early Moksha, deliverance, to attain Goloka, the abode of Krishna.

Being so venerated and done under such stringent, time honoured rituals, these remains, remain beyond the purview of scientific scrutiny.

The knowledge of its existence has been revived through these rituals every 12 years, in every generation and the remains of Krishna, have been venerated every day by millions of devotees who have thronged this temple.

This is the beauty in this temple – it is not only the beauty of the idol but also the beauty of how these remains and the memories they invoke have remained with us through this tradition across millennia.

The Memories of Krishna

Puri is thus an ancient city dedicated to Krishna and those who settled here brought with them the legends of Krishna from the times of His childhood at Braj to the times of Dwaraka.

This is evident from the daily rites in the temple which give prominence to the childhood days of Krishna when he used to steal milk, butter, cream and curds. The most famous offering in their rites is Kheer, a milk and rice based sweet pudding. People of Orissa, even to this day, fondly call Krishna as “Khiri Chora”, meaning “one who steals Kheer”.

More on Jagannath Puri in our book, ‘Historical Krishna’.

The famed Rath Yatra, which dates back to the period of the Purana, is held every year at this temple. 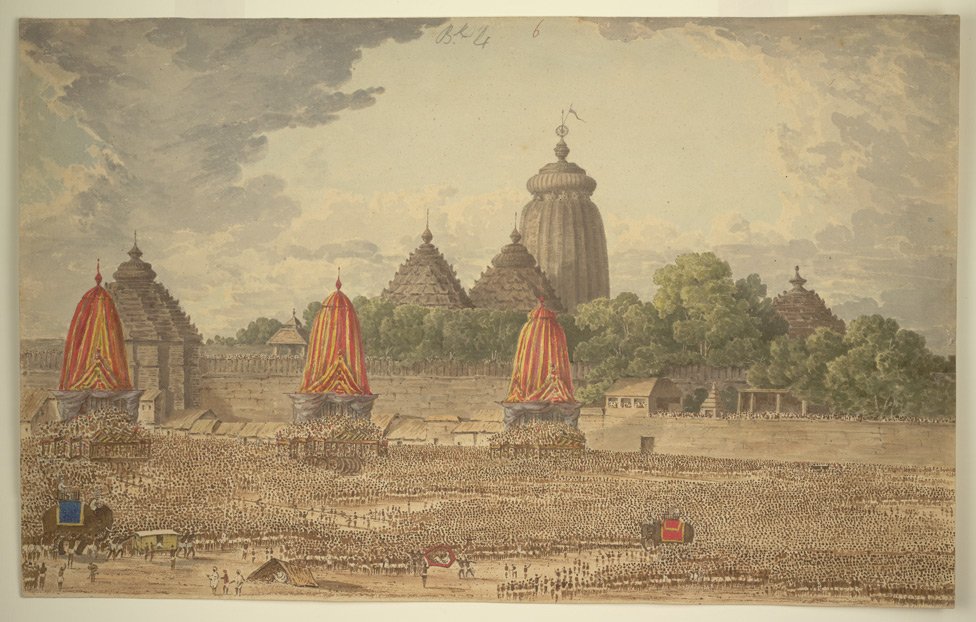 A Painting of Jagannath Rath Yatra from 1818

There are vivid descriptions of this festival in Brahma Purana, Padma Purana and Skanda Purana. Kapila Samhita also refers to Rath Yatra.

The idols of Jagannath and His siblings, brother Balabhadra and sister Subhadra are taken out on this day in a procession on huge chariots, rath, the likes of which cannot be matched in size, the crowds they draw and the continuity in tradition.

A significant ritual associated with the Ratha-Yatra is the “Chhera Pahara,” when the king symbolically sweeps the path of the Rath. This symbolizes that right from the king to the commoner, everyone is responsible for maintaining cleanliness around the place where the yatra is organized.

This practice is followed even today and the present king Raja Gajapati Divyasingh Dev also follows the tradition.

A festival of unity

Rath Yatra, Rathotsav, is a common annual festival celebrated in all temples, all across India and the world. It is a festival to unite people from all walks of life to come together to pull the Rath. A truly peoples’ festival.

Lord Jagannath true to His name not only moves the cosmos, but moves the people to celebrate His Rath Yatra, not just in Puri but also in other parts of the country and the world. The Rath Yatra festival is celebrated in all major Indian cities. It is also observed in countries outside India.

The juggernaut is indeed rolls all over Jagat, the world on Jagannath Rath Yatra.