Plastic Surgery is a branch of medical science which involves the surgical process of restoration, reconstruction or alteration of a part of a human body.

In today’s world, the purpose of plastic surgery has become more of cosmetic in nature.

Did you know that the science of Plastic surgery had its roots in India? And for a very different reason.

In this case, the roots lay in the human nose.

The year was 5076 BCE, about 7100 years ago. It was in the deep and dense forests of Dandakaranya. Danda means to punish and Aranya means forest. Dandakaranya got its name as it was a harsh and punishing forest. It is the stretch of forest that used to cover Central India, vestiges of which are still found smattering the central landscape of India.

Rama, the young and handsome, exiled prince of Ayodhya, with his, beautiful wife Sita and ever vigilant younger brother Lakshmana had made this forest their home during their 14 year exile.

This Dandakaranya forest was part of the kingdom of Lanka, ruled by the fearsome Rakshasa king Ravana.

Once, while wandering through the Dandakaranya forest, Surpanaka, the Rakshasa sister of Ravana spotted Rama and Lakshmana with Sita. Bewitched by Rama’s radiant looks, she assumes the form of a beautiful damsel and proposes to Rama. Rama turns down her proposal and asks her to check with Lakshmana instead. When Lakshmana also declines, Surpanaka loses her cool, her assumed beautiful form and charges towards Sita to harm her out of jealousy.

At this juncture, Lakshmana pulls out his sword and chops Surpanaka’s nose. Mind you, he does not maim her in any other way other than chopping off her nose to shame her. This incident made her incite Ravana into kidnapping Sita, eventually leading to Rama waging a war on Lanka and killing Ravana inorder to rescue Sita.

The place where this shaming of Surpanaka by a Nose cut took place, came to be called Nasik, from nas for Nose.

More on this in our book, Ramayana in Lanka.

The act of shaming, in the various languages of India, literally translates to a “Nose Cut”, for example Naak kaatna in Hindi. Perhaps it has its contextual roots in this incident from 7100 years ago.

But if this was a common form of shaming, 7100 years ago, it implies that a Nose cut for shaming or adultery must have had its roots even before 7100 years ago.

But why cut the nose for shaming? What was the rationale?

We need to go forward in time to 1790s to see the reason.

In August 1794, The Madras Gazette carried an incredible story. 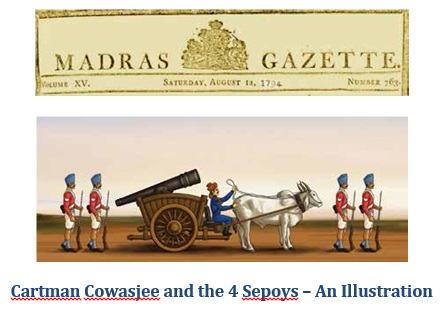 It was about an Indian cartman and 4 Indian sepoys who were fighting as part of the British army against their own brethren. These 5 men were captured by Tipu Sultan’s army and their noses were chopped off as a sign of infidelity to their motherland.

These 5 men went to the house of a potter in Pune, who surgically fixed their noses and they walked out with repaired noses. 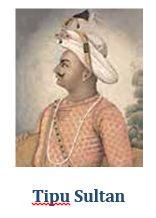 It was about an Indian cartman and 4 Indian sepoys who were fighting as part of the British army against their own brethren. These 5 men were captured by Tipu Sultan’s army and their noses were chopped off as a sign of infidelity to their motherland.

These 5 men went to the house of a potter in Pune, who surgically fixed their noses and they walked out with repaired noses.

The surgeon’s name was mentioned as Maratta Vaidya Kumhar – Maratta as Pune was the land of the Marathas, Vaidya since he was a man of medicine, a surgeon and Kumhar as he was a potter by birth.

This was reported by two travelling British doctors – James Findley and Thomas Cruso who, during their travels, were astounded to witness such a new, advanced surgery unknown to the world, being done in the house of a potter. They came to Madras, which was then the centre of British power in India and wrote this article in The Madras Gazette. This article was later reproduced in The Gentleman’s magazine, a popular magazine of London, in October 1794.

The First Rhinoplasty of the West

The fact that the procedure of Rhinoplasty surgery was an Indian offering to the world, among many other surgeries, has been expressed by Prof. A.A. MacDonell and Sir. William Hunter of the University of Glasgow.

Royal Australasian College of Surgeons’ Museum in Melbourne too acknowledges the source of Rhinoplasty, plastic surgery, to have been India, 2000 years ago. While commenting how the practice of surgery, especially plastic surgery grew due to the World War I, the Museum states that India had already been practicing these surgeries about 2000 years before this period too. That it was a common enough surgery in India then.

This form of Nose surgery, had been practised in India for many centuries. It became the forerunner for Plastic Surgery.

The father of surgical procedures in India was Susruta.

More on this in our book, Brand Bharat – Roots in India.

The knowledge of Indian medicine, Ayurveda, travelled and reached far off lands to register India as a land of medicinal sciences.

Along with this, the science of Rhinoplasty and Plastic Surgery also travelled.

On this Plastic Surgery Day, let us remember this contribution of India to the world.