Maharana Pratap is one of the kings who has left a permanent stamp in the minds of the people of this country. He was a Rajput ruler of Mewar, a region located in the present day Rajasthan, and gave a tough time to the Mughals.

Maharana Pratap’s Rajput kingdom, highlighted in this map in orange, was an island in the midst of the Mughal Empire, which speaks volumes about the valour of this king, who had kept the Mughals at bay. 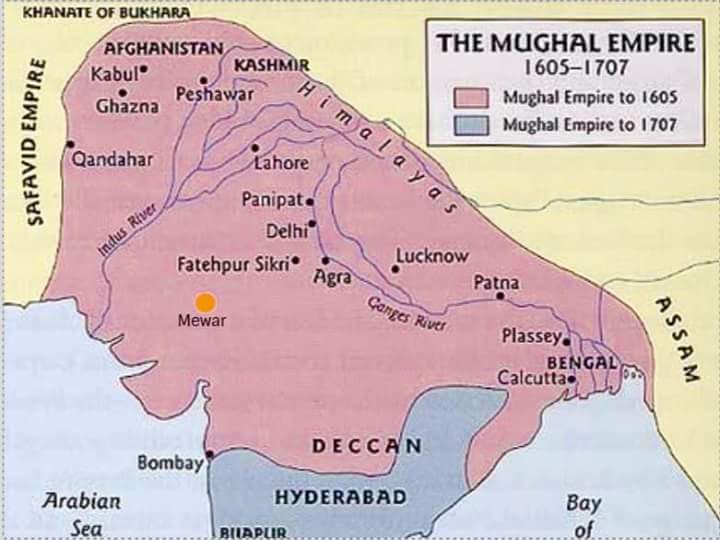 The rivalry between Rana Pratap and Akbar is well known.

A fierce battle was fought between Rajput King Maharana Pratap and Mughal King Akbar on June 18th, 1576 CE, which has now come to be called the Battle of Haldighat.  Another record says that this battle was fought on 21st June. But these four days from 18th to 21st are commemorated in Haldighat and also at his birth place.

Akbar wanted to extend his Mughal Emipre. The ploy he adopted was to take strong Hindu kings under him through friendship. These Hindu kings in turn helped him to defeat other Hindu kings. Maharana Pratap was persuaded by Akbar in every way, to come under him, but the Rajput King refused. Akbar soon lost his cool and declared a war on Rana Pratap. Rana Pratap also made preparations for the battle.

The two armies took stage at Haldighat. Akbar’s Army had 200000 soldiers while Rana Pratap had only 22,000.

The lesser numbers for Rana Pratap did not mean that the battle was a cake walk for Akbar. Rana Pratap and his soldiers fought with great valour. As much as this battle was fought by Rana Pratap’s brave warriors, it was also a story of great versatility shown by his horse, Chetak. Even though Rana Pratap was defeated, Akbar’s army was not able to completely conquer the Rajput king.

Maharana Pratap on his horse, Chetak at the battle

Rana Pratap’s horse made a great sacrifice in saving his master. Just as Alexander had a brave horse in Bucephalus, Rana Pratap had Chetak. Chetak was a native breed war horse, a Kathiawari.

Alexander on his horse Bucephalus

Chetak was seriously injured in the battle, but, to save his master’s life, it crossed over a big canal, to safety.

As soon as it crossed, it fell down dead. Rana Pratap broke down and was moved by the great commitment his horse had shown in saving his life. He created a beautiful garden at the spot where Chetak had passed away. A statue was later erected in its memory at Haldighat, where it had shown great bravery.

Scooter and Helicopter in its name

The valour of this horse is so ingrained in the Indian minds that the famous scooter in the 1980s and 1990s of India was named Chetak. Chetak is also an inspiration behind the name of India’s indigenously built helicopter. There is also an Express train in the name of Chetak.

Many statues have been built over the centuries depicting Rana Pratap on his horse, Chetak.

Statue of Maharana Pratap on his horse, Chetak

This battle of Haldighat goes down as one of the greatest battles fought by Maharana Pratap.  After this battle, the ethos and valour of Maharana Pratap reached far and wide.

His valour has been commemorated by the Government in a coin.

A serial on Maharana Pratap was aired in TV, in English, Hindi and other vernacular languages. This serial was very popular, even in regions not visited by  Maharana Pratap.

Such is the spread of his valour all over the land, across languages.