Kabir, the poet Saint lived between 1440 CE and 1518 CE.  Kabir’s life aimed to bring amity among the Hindu and Muslim community. He was one of those saintly personalities, revered by the Muslim, Hindu and Sikh communities. 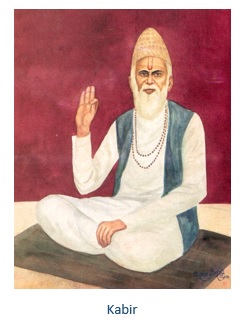 Kabir’s philosophy and poetry have influenced many across the world. There is a particular community who follow the legacy of Kabir under the name, Kabir Panth and have made His life and teachings their inspiration. Their numbers are estimated to be around 1 crore.

There are various legends to Kabir’s birth. One says, He is the son of a Brahmin widow adopted by a Muslim weaver family.

The name Kabir is derived from the 37th name of God in Islam, Al-Kabir, meaning “The Great One”.

Kabir’s main occupation was weaving. He was also a philosopher who enlightened people on how to weave through the challenges of life.

A Disciple of Ramananda

Although, Kabir had an Islamic upbringing, He became the disciple of Hindu Saint Ramananda and was greatly influenced by the Indian thought of Vedanta and Advaita.

It is indeed very interesting to note how Kabir became a disciple of Ramananda.

Kabir knew very well that coming from a Muslim family, He would not be accepted by a Hindu Guru. So, he hid on the path near Ganga river, where Ramananda came to have his bath every day. As Ramananda came to have his bath, he mistakingly stepped on Kabir and exclaimed “Rama, Rama”. Kabir immediately declared that he had received his Guru mantra and that Ramananda should accept him as his disciple. Setting aside orthodoxy, Ramananda accepted Kabir as his disciple.

A devotee of Lord Rama and chanting the name Rama, Kabir realized Rama as the omnipresent divine principle.

A Disciple of Takki

Kabir’s Islamic roots tell that he also had Sufi Pir, Takki of Jhansi as his Master which acquainted him with Sufi philosophy.

Kabir in his poems and teaching draws around the major principles, symbols and philosophy of both Muslim and Hindu thought. He spoke out against the dogmas of both religions.

His works inspired even the Sikh Guru Arjan, who included Kabir’s teachings in Guru Granth Sahib, the Sikh text.

His major works, His legacy

Kabir works include Kabir Granthwali, Sakhi Granth and Bijak. The main feature of these works are his two line couplets, ‘Kabir-ke Dohe’ which convey His teachings and have inspired many over last few hundred years. 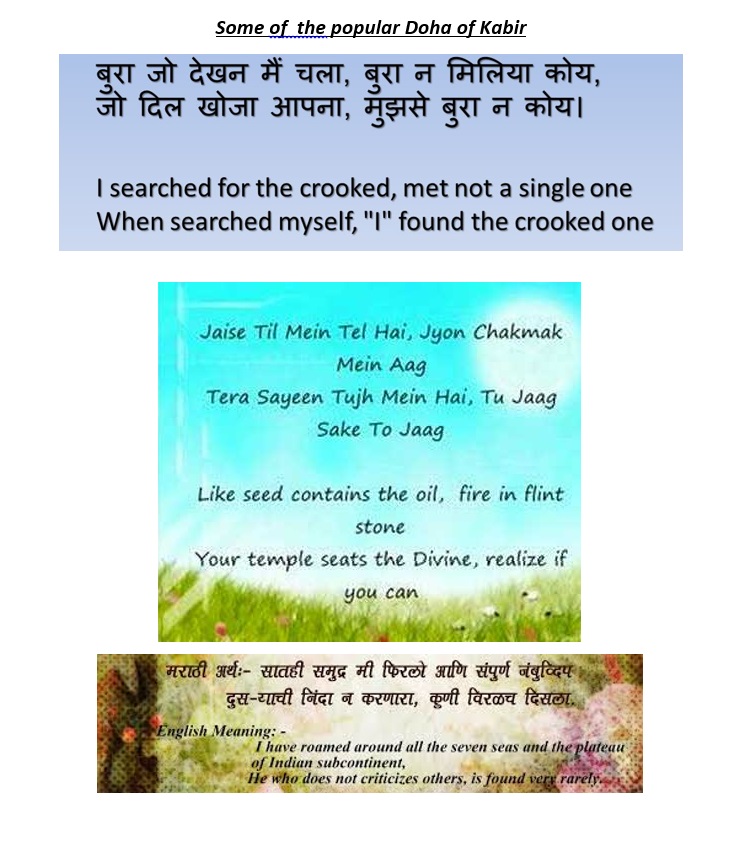 The life and teachings of Kabir have been recognized since independence in many forms including through arts, cultural events and also through postal stamps.

On National Handlooms Day, Kabir awards are given away by the Prime Minister to distinguished handloom personalities.

On his death, there was a dispute between the Hindus and Muslims as to who should have the funeral rights of this saint. But, alas, when they lifted his kafan, only flowers were found. The Muslims buried half the flowers and Hindus, the other half. Thus, Kabir became a symbol of religious unity. 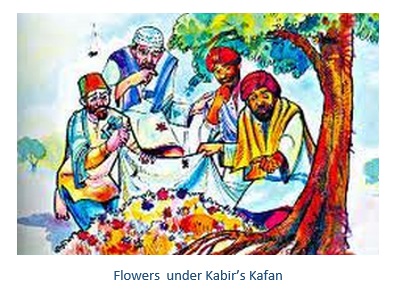 The birthday of Kabir is recognized as the day of religious amity.

One thought on “Kabir Jayanthi”