The most spectacular festival

Thrissur Pooram is celebrated every year in the month of April-May at the Vadakunnatha Temple in Thrissur city of Kerala. The UNESCO has referred to Thrissur Pooram as, “The most spectacular event on the planet.”

The festival was started by Raja Rama Varma, the then Maharaja of Mada Rajyam, the present day Kochi in the year 1798. The Maharaja brought together many temples around the main temple, Vadakunnathan and organized the event as a mass festival.

Coming together of Gods

As it happens, the gods and goddess of these various temple come together for celebration. 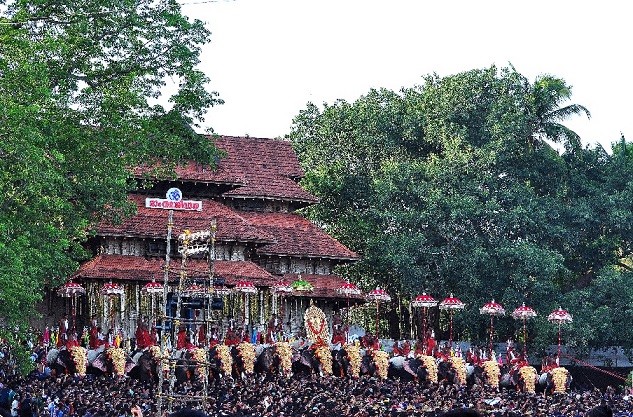 The festival attracts tourists from all over the country and also from abroad. One of the important features of this festival is that people from all communities participate and play a key role in organizing the festival.

The Elephants are the main attractions of this festival.

The festival is celebrated for 36 hours continuously with an array of elephants decorated with golden headdress, ornaments, bells, palm leaves, peacock feathers, umbrellas and beautiful paintings that are swayed along with the music. The sight is wonderful to behold!

Array of elephants at Thrissur Pooram

There is a magnificent display of colours during the kudamattom competition which involves a rhythmic alteration of coloured parols by those sitting on elephants.

The next day of the Pooram festival is Pakal Pooram with people displaying their skills in various traditional instruments such as Thimila, Edakka, Kombu, Chenda, Elathalam and Sanghu.

The Thrissur Pooram festival is concluded with a display of fireworks. A wide variety of colourful crackers are let up, delighting the spectators. The farewell is marked with 2 elephants greeting each other and fixing the next Pooram date.