The 1st of May is called May Day world over and is celebrated as Labour Day in many countries.

The genesis of May Day and Labour Day come from the struggle of the labourers in US and other parts of the world in late 1800s for limiting their work day to 8 hours. It later got associated with the Marxist communist idealogy of the labour class being the toilers.

Today, the May Day, Labour Day celebration is a vestige of Marxist communism. We use the word vestige because the very ideology of Marxism, communism is tottering.

Ideas keep evolving through the ages. Different ideologies come up at frequent intervals. The not so sound ideologies, enforced by force, die down after their brutal, repressive force is spent. They come to an end by the force of nature, the nature of people and the collapsing nature of unsustainable practises that these ideologies espouse.

One such ideology that is now in the brink of extinction is communism.

What happens on May Day?

The Labour Day, May Day thought, where we are made to celebrate labour, is an idea propped up by the communists.  In the mid of last century, when communism was a raging thought in Russia, China, Cuba and such other countries, the might of the people, the military might, was showcased on May Day.

It was a day for showing solidarity and the might of the working class. They went on marches, waved flags and made bombastic speeches. This was their idea of May Day celebrations, which continues even today.

In contrast to this, in India, through the ages, in different parts of the land, the contribution of the people, the labour of the land were valued and celebrated, by venerating their skills and art.

Each variety of trade guild, had their own special labour day. It was a way of venerating their trade and trade equipment and a day for reflecting and paying respects to the great people, who had taught them the skills for the trade.

Let us look at some of these trades and their special days.

People who practise trades like architecture, sculpting, carpentry, smithy and metal works, jewellery making, painting and such other creative forms of art and architecture, venerate and celebrate their day as Vishwakarma Day. 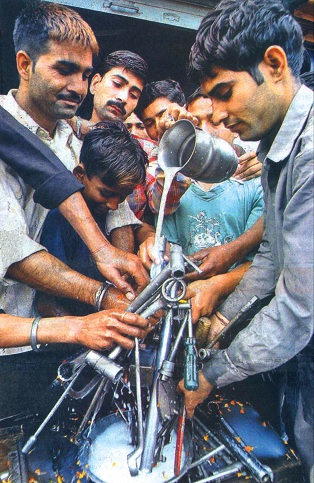 Farmers celebrate the harvest day as a day of thanks giving to all those who helped in growing the crops and harvesting them and most importantly to mother Nature.

In south India it is celebrated on the day of Sankaranti.

In Tamil Nadu it is called Pongal.

In the east of India, Assam, it is called Bohali Bihu.

Similarly, teachers are also a class of society, who labour hard to educate the society as a whole. The Teachers Day, Guruvandana, is celebrated on Gurupuja Day.

The veneration is not limited to the trades mentioned here alone.

That even the animals help in the labours of the land is recognised. The bull and the cow are also venerated and there is a day celebrating these animals for their help in aiding productivity. In Tamil Nadu they celebrate a day exclusively for domestic animals, a day after Sankranti or Pongal. This festival is called Mattu Pongal. 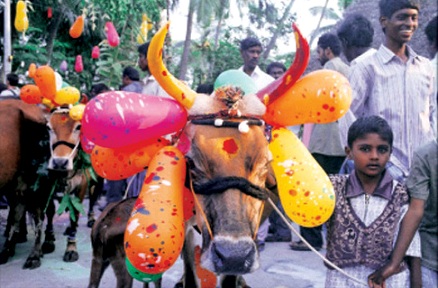 In south Karnataka, it is celebrated as Kambala.

All these tools are collectively venerated, thanked and celebrated on the 9th day of the Navaratri festival. This day and festival is called Ayudha Puja. Ayudha means tools, implements and puja is a form of veneration.

An  Ayudha Puja for the weaponry, in Bengal, during the British days 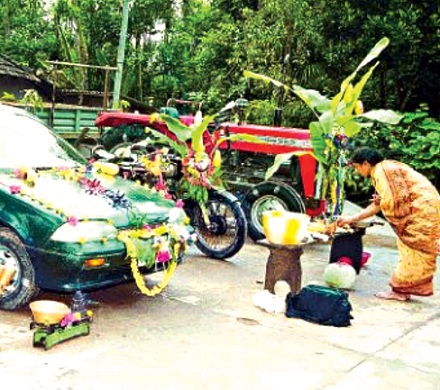 We can see from all this, that this land not only acknowledged but also venerated the labourers of different vocations on different occasions. This respect was not only for humans but also for the animals who form a part of the work force and also for the tools and implements.

This overall celebration of work kept the people industrious and helped maintain a spirit of veneration and ownership towards one’s work and activities.

This sense of ownership brought in a sense of belonging, connect with the society and gave rise to the feeling of responsibility.

This feeling of responsibility towards one’s family, society and Nature  resulted in the blossoming of a temperament geared towards sustainability in the society, due to which prosperity prevailed on the land for the last 5000 years and more.

Each individual trade thus had their special day to celebrate their skills.

Given this overall understanding, isn’t it time for us to get back to respecting each vocation and the labours that the people have undergone for their families, the society and the civilisation as a whole?

In present times, when communism is tottering and the idea of labour and workforce have taken a different shape, the idea of Labour Day is also losing its sheen, as Labour Day is only a one day “tamasha”, gimmick of walks and talks.

While the modern Labour Day of the last one century has been a fight for the rights of the working class, with the civilization having moved on since, the need of the day is to appreciate the skills of each of these individual labours so that they can be further refined in a sustainable manner by the labourers in this new century.

Each skill and labour should be individually recognized and appreciated on their respective days, for their contribution to keep the society functioning together as a whole and in keeping the society moving ahead in a sustainable manner.

May we therefore celebrate many Labour Days all the year long.