The thinkers of ancient India had realized the ground reality that, kings may come and go, kingdoms may change in size and boundaries, but the prosperous land needs to be governed such that, the change of powers does not affect the basic social fabric, nor the sustainability of the land. It is precisely to meet this challenge, that they had envisaged a local administration system called the Panchayat system, a unique system of local governance, keeping in mind the vagaries of time. 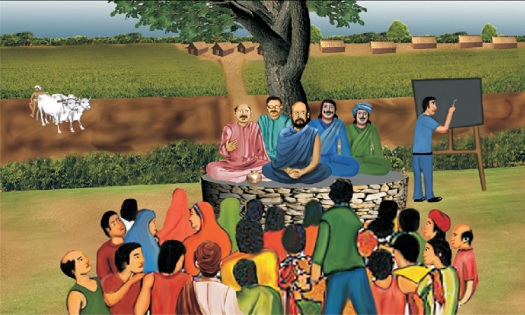 A Panchayat in Progress – An artist’s impression

What is so singular about this system and its practice that helped tide over the vagaries of time and rule?

An Insulating, Self Contained Model

The contribution of this Panchayat system to the prosperity of the land as a whole, has been summarized by Sir Charles T. Metcalfe in his Report of Select Committee to the House of Commons in 1832. 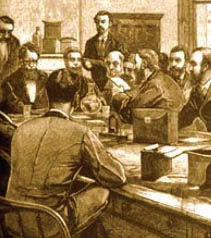 You may wonder what this means!

While there were many kingdoms ruled by different rulers, the model of governance was framed, independent of the individual ruler and the kingdom. The Panchayat administration, followed in every village, was uniform across the land, across kingdoms.

This model of local self governance was uniformly practiced, undisturbed even during times when there was no king or kingdom.

Policies and priorities framed locally by the Panchayat were not disrupted, ensuring continued and sustained prosperity.

This Panchayat model, could be singled out as one of prominent administrative reasons for the continuous prosperity of India for over 5000 years.

It is the local administration of the village, by the villagers, for themselves.

This village governance system has been followed in India from time immemorial wherein, people elect and empower a local village council to handle matters of

It was a council of five members who would decide on matters. They were called Panch Parameshwar, the 5 leaders. Hence the name Panchayat, for this model of governance.

We can see a sample of this Panchayat System of administration of the villages, in the stone inscriptions at the Srinivasa temple, in Uttiramerur, in Tamil Nadu, listing the rules for the conduct of elections. 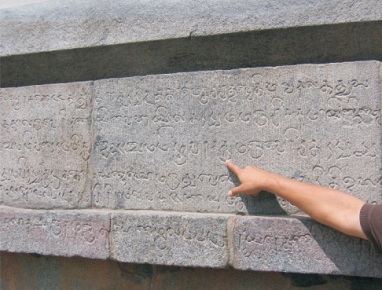 More on the System of Administration and Practice of Law in India through the times, can be found in our book on Administration, in the Bharath Gyan Series.

Probably, it is after understanding this ethos and the reasons for its proven success, that Mahatma Gandhi strongly advocated bringing back the Panchayat system of village administration, which in his opinion, was the administrative backbone for this prosperity.

It was a case of many small footprints together, having the sure footed stride of a big elephant. Many small power houses working together with an elephantine strength. 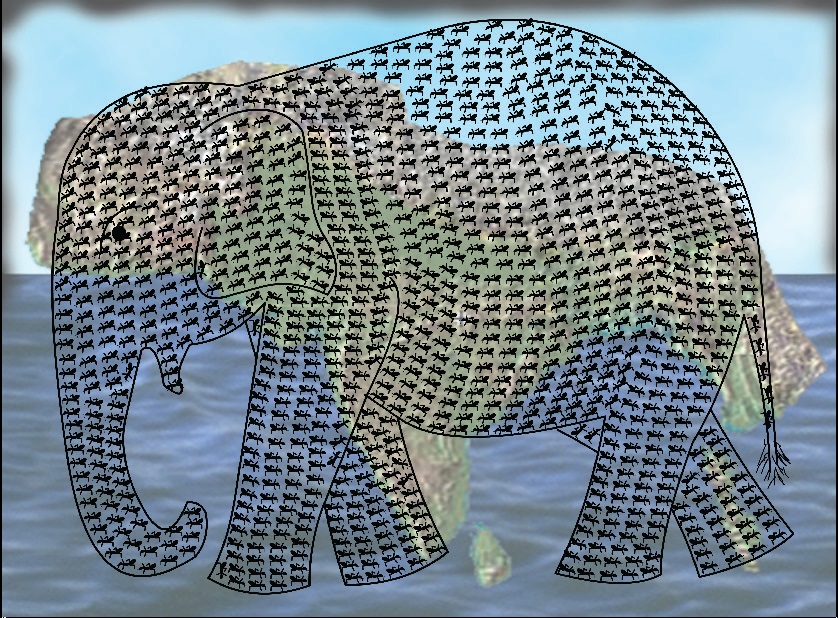 Ants are known for their industrious nature.

We see all these, when we see a train of ants going about their work, unmindful of anything else.

This synchronised effort cumulatively is elephantine in strength.

Each man, each family, each Panchayat is like an ant, busy at its work. They carry out their Dharma, their duty. Collectively, their strength and output is akin to that of an elephant.

This work culture, along with the water harnessing skills, was the strength of the land and the reason for the prosperity of the land through the ages.

Sadly, the Panchayat Raj today lives as a namesake shadow with no real powers, no funds and no autonomy. It is embroiled in the tangles of the State and Central administrations.

More on this in our book – You Turn India.