On 13th April, 1919, the people of Amritsar were peacefully celebrating the Punjabi New Year – Baisakhi at Jallianwala Bagh, a public garden in Amritsar, when they were mercilessly shot down on the orders of General Dyer, of the colonial British force. One of the worst massacres in the annals of World History. 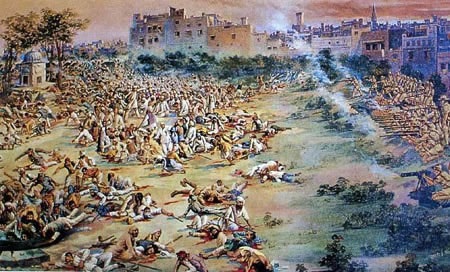 Brigadier General Reginald Dyer had sensed a public uprising against the British Raj, and had banned all public meetings.

This information had not reached the masses. On 13th April 1919, on Baisakhi, the Punjabi New Year, a few thousand villagers had gathered at the popular Jallianwala Bagh to celebrate the festival.

When he saw the gathering being held against his orders, he ordered his riflemen to shoot down the crowd. 1650 rounds were fired in cold blood. The firing was not directed in air, but directly on to the people in the peaceful gathering.

The firing came to an end because they ran out of bullets. The firing did not stop out of mercy.

Unthinkable for any civilized officer to order thus.

He was so remorseless, that, he later said, if he could, he would have taken the armoured vehicle in and fired with it.

As per estimates, more than 1000 people were killed and 1100 were grievously wounded.

Many people jumped into a well to save themselves. Around 120 bodies were recovered later from the well.

The Martyrs Well at Jallianwala Bagh

A memorial was built in memory of those who were killed in the massacre.

This event of British cruelty shook the Indian nation out of its slumber and marked an important step towards the end of British rule in India.

Mahatma Gandhi launched the Non Cooperation movement, Satyagraha, against the British in 1920, after the Jallianwala Bagh massacre.