Brahmacharini form of Devi refers to the life of Devi Parvati, prior to Her marriage, when she undertook great tapa, penance to propitiate Lord Shiva. This fierce penance of Parvati led Her to attain the state of Brahman. Lord Shiva was pleased with Her, and accepted Her as His consort.

In this form, Devi is depicted as holding a japamala in Her right hand and a kamandala, water utensil in Her left hand. The japamala is symbolic of tapas, while the water symbolizes purity. These two qualities are necessary for attaining Brahman. 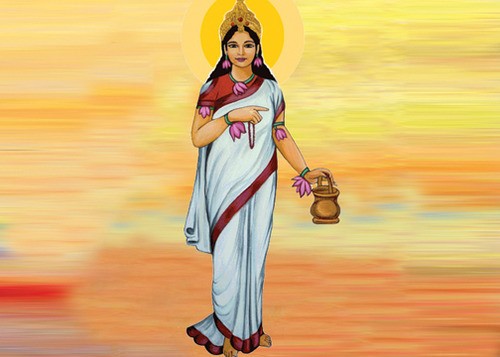 The word Brahmacharini, which is the feminine form of Brahmachari, consist of two words, Brahman and Achar.

In the Indian tradition, Brahman refers to the expansive mind. From the times of the Veda, the mind is not regarded as a physiological organ, gland or part of the brain. It is something as fundamental as light, air, energy etc. and is spread everywhere across Creation and even in that which “exists before Creation”.

True, “existing before Creation” is indeed an oxymoron.

If you close your eyes, your other senses and thence the mind, you do not see the Universe any more or you feel as big as the Universe.

Thus with one’s mind, one can exert influence beyond oneself out into the continuum. Only thing is that, we know of asserting such influences by various names such as wish, prayer, blessing, charm, spell, curse and the likes. We practice them too, but often with no effect, since we have lost the connect.

Brahmacharni is the One who is connected to this Expansive Mind, and conducts Oneself from that state.

More on Brahman in our book, Brand Bharat – Vol-5 – Future From India. 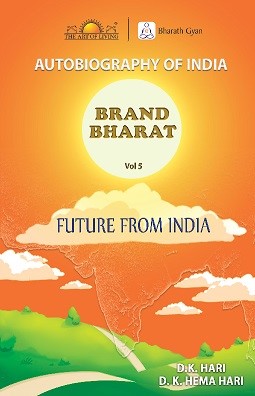 There are two other prominent terms in the Indian ethos with the words Achar, namely Vichar, Kalachar Desachar.

The word “culture” shares its root both phonetically and semantically with the sound and concept of Kalachar.

India is a nation that is ideational. It is bound by invisible threads.

What do these statements signify?

India is one culturally, yet, water harnessing techniques vary across regions.

India is one culturally, yet the designs of shelters vary across regions.

India is one culturally, yet food habits vary across regions.

India is one culturally, yet clothing varies across regions.

India is one culturally, yet languages vary across regions.

India is one culturally, yet art forms vary across regions.

So, how can this be called “one nation”?

What binds the people of this land together is their common ability to understand local dynamics and differentiate it from global, universal factors.

It was a common ethos across the land that man should adapt himself to his local surroundings and practice techniques that will keep the local region sustained. Yet, at the same time he should recognize and align himself with the principles of Nature that are cosmic, universal in level.

Thus, the people of this land, at a higher level, were tuned to the same principles of Dharma, which formed the basis of their Kalachar, but at an individual level or at a community level practiced techniques that were local to that region, Desachar.

Kalachar denotes techniques that have become fine tuned into an art and have transcended time to be applicable across the land.

The word “culture” shares its root both phonetically and semantically with the sound and concept of Kalachar.

India is thus a nation that is bound by a common Kalachar, her culture and is distinguished by her multitudes of Desachar.

It is this ideal of being able to live with one’s own Desachar, yet bind with others across the land, through the common Kalachar, which makes India an ideational nation bound by invisible threads.

The word “ideational” is a word coined by Tagore to mean the land is held together by a set of ideas and ideals and not just by a man marked political boundary.

More on Achar, Vichar, Desachar, Kalachar, in our book, Breaking The Myths – Vol – 1 – About Identity.

The life of every individual in the society is divided into 4 sequential stages called Ashrama.

More on this in our book, Breaking The Myths – Vol-2 – About Society.

Devi is the eternal Brahmacharini, who passes on knowledge from generation to generation.

Devi Brahmacharini is worshipped on the second night of Navaratri.