The World Sparrow Day is observed every year on March 20th to kindle interest in sparrows and their preservation.

The scientific name of a sparrow is Passer domesticus.

As the name ‘domesticus’ suggests, the sparrows lived along with humans in their habitations. We don’t see sparrows in forests as much in villages and towns. Until a few decades back, sparrows could be spotted in every house, building their nests in huts and houses.

In the Tamil language, the sparrows are called Kurvi.

With excessive use of fertilizers and pesticides, the first casualty have been the sparrows.They have been slowly poisoned to death, for, they could not withstand the harmful chemicals in our domestic foods. Our stomach and digestion system which may be slightly more robust than that of a sparrow is not far behind in showing signs of disease and problems. The sparrows are a warning bell for us. Similar is the case with bees.

In 1958, the Chinese government led by Mao Zedong ordered the killing of all sparrows because they ate from crops. As they were nearly driven to extinction in the country, the number of locusts surged and crops were devastated.

There are folk songs, panting of sparrows galore. Even one of the pataka, fire crackers that we burst in Diwali is named after Humble sparrow, kurvi. 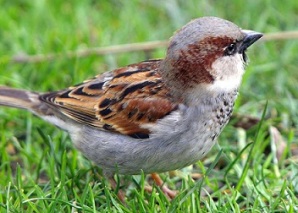 A person who shuttles to and fro carrying small parcels is also nicknamed kurvi, a sparrow, a busy body doing useful errands.

We had a few year back almost lost the Nature’s busy body who does small errands for us in the cycle of agriculture and its domestic connect.

But sparrows have started reappearing in green pockets of cities. They’ve become immune to the cellphone towers and radiation which caused the decline in numbers initially. Nature has its ways!