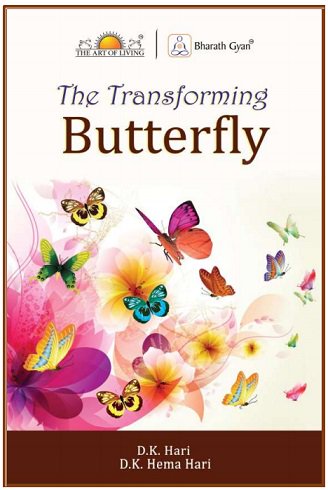 All over the world, butterflies have been associated with transformation. The caterpillar is a completely different creature before it metamorphoses into a butterfly.

Metamorphosis from a caterpillar to a butterfly

Richard Bach, an American writer said, “What the caterpillar calls the end of the world, the rest of the world calls a butterfly.”

Caterpillar stands for bondage while butterfly is an epitome of freedom and beauty.

According to Veda and Upanishad, man is completely transformed when he realizes The Divinity, becomes free and beautiful like a butterfly.

This insect was named ‘butterfly’ from the words ‘Butter’ and ‘Fly’, due to the appearance of its excreta which resembled butter. The word Butterfly in turn traces its origin to the old Dutch words, ‘Botervlieg’ and ‘Boterschijte’. From this, it was for some time, appallingly even called Buttershit.

Later it was changed to Butterfly.  A more decent expression!

Interestingly, the Butterfly taste with their feet, podos, pods.

In Samskrt, butterfly is referred to, by the words Chitra Patanga. Patanga is a kite. Patanga comes from the root pata for pataka, meaning a flat cloth or flag. Chitra is a painted picture. Butterfly is called Chitra Patanga as its wings resemble a colorful flag in air.

In Telugu, butterfly is called Sita Koka Chiluka. Chiluka means ‘Parrot’ and Koka means ‘Sari’. In other words, the wings of a butterfly is compared to the beautiful Sari of Sita.

In Malayalam, butterfly is called Chitrashalabham.

One may wonder why in the Indian languages, be it from Hindi to Telugu, to Tamil, to Malayalam, the butterfly is linked to a Kite, Patang.

The answer to this lies in our most anicent text, the Veda.

The oldest recorded observation on Butterfly is found in the Veda. There is a Sukta, section, on Butterfly, by the Vedic Rishi Patanga Prajapati, in Mayabheda hymn, in Rig Veda 10.177.

It is here the Rishi first refers to a Butterfly as Patanga. Through this Patanga, he looks at environment, both Sthoola, gross and Sookshma, subtle and also the illusion, Maya that plays with us in our physical eye and in our inner eye.

Profundity in the MayaBheda Sukta

The butterfly bird (i.e. the sun) bears in its mind, that incantation (vAk, the holy utterance) which the Gandharva in its womb is singing soundlessly. That brilliant one’s, resounding mind, the wise literally drink in, at this enlightening juncture. – 10.177.2

The butterfly bird, anointed with the Maya (magic) of the Asura can be seen by wise seers with their minds and heart; these enlightened can then see clearly, the radiance of that which rises forth from within the ocean, breaking through from its being, in all the directions it desires.  – 10.177.1

The never-resting guardian can be seen moving between the northern and southern halves, coming near and going beyond, journeying in its path, continually revolving around the world. – 10.177.3

The Subtle Message in the MayaBheda Sukta

This Sukta is uttered during a Vedic ritual, Homa, while making an offering to the Sun and describes the experience to be gained due to that act.

Sun, the Patanga in the Sky

The word Patanga in this Sukta refers to the Sun. The Sun is likened to a butterfly in the sky.

The word Maya means illusion, magic as well as Maya the craftsmen, designers par excellence, who with their Asuric spirit, i.e  the powerful spiritedness to design things which are out of the world, heavenly, beautiful, i.e. create magic, just as Nature has created magic with the Butterfly.

The word Bheda means to distinguish, to separate and see.

The Sun is likened to a magical butterfly, Maya Patanga, for, its white rays actually conceal an entire spectrum of colours like the colours on a butterfly.

It is when such Seers discard the Maya, see this Bheda and unite these 2 energies within themselves, will they be able to drink in the unvoiced, Gandharva like, mystical, rhythmic music on the cosmic order Rta, that the Sun is trying to express.

This is the ritual, act that the Seers are seeking to perform during the Homa when this MayaBheda Sukta is being chanted.

In the Indian thought, Gandharva are looked up to as intermediary beings between the Divine and the humans. They are associated with trees and flowers, the flora and fauna, which are their dwelling place.

Gandharva are those, whose sense of aesthetics is high, be it in Music, Dance and the Fine Arts. These arts form a separate branch of Veda called the Gandharva Veda.

The butterfly with its myriad colours, sizes and shapes is a design par excellence of Nature. It is the result of a magic spell cast by Mother Nature on the drab caterpillar, transforming it into this gorgeous flitting, flying flag of joy, a Patanga.

The choice of the Butterfly, Patanga, to denote the colours of the Sun and the magical nature of Nature, is the highest honour one can give to this tiny winged creature.

Did the Rishi get the name Patanga from the Butterfly called Patanga?

Did the Butterfly get the name Patanga from the Rishi Patanga?

In the Bahasa language of Indonesia, butterfly is referred to as Kupu Kupu.

Muhammad Ali, the famous boxer compared himself to a Butterfly and penned the lyric,

Many cultures relate butterflies to the human soul.

In the Egyptian lore, butterflies represent the immortality of human soul.

Manos Jones, an author from New York who has done extensive research on butterflies, says in her work, “The Spirit of Butterflies: Myth, Magic, and Art”,

“The butterflies were presumably one of the pleasures that awaited the deceased in the afterlife, reflecting the Egyptian belief in the immortality of the human soul.”

In ancient Greek the word for butterfly is “psyche” which means “soul”. It was also known by the name of Eros ‘human lover’.

Aristotle had named the butterfly Psyche, the Greek word for soul.

The words Psychic, Psychology, Psychiatry are all derived from the word Psyche. All these subjects deal with the mind.

Greek character for the study of Psyche

Psyche, Butterfly deal with the subtle, not just in the Veda, but in ancient Greek thought as well.

But what gives the Butterfly such an image?

Is it the way Butterfly can migrate that gives it a connection to the soul?

For afterall, all ancient thoughts of the world believed in the transmigration of a soul.

The migration of Butterfly, across generations has been recorded, filmed and have never ceased to create amazement at how they can travel the same migratory path, across lives.

The Migration Path of Monarch Butterfly

How do Butterflies remember, across 8 generations, as to where to get back to?

How do they know from where their ancestors started the migration cycle?

This knowledge seems to extend beyond their lifetime. It seems to rest in their soul across generations.

Perhaps this is why, a released soul is often likened to a Butterfly flitting around, from flower to flower without a care, like a free, liberated soul.

In today’s day and age, it is the butterflies, bees and birds that are looked at as the health barometer of the environment.

Butterfly and Bee, The Barometer for Environment

Butterfly Effect is a term used in Chaos Theory to indicate the interconnectedness of different parts of a system. If one small part is affected, the whole system suffers.

The name ‘Butterfly Effect’ comes from a hypothetical scenario where weather systems are so sensitive to initial conditions that a butterfly’s wings can set off a violent storm.

“The sensitive dependence on initial conditions in which a small change in one state of a deterministic non-linear system can result in large differences in a later state.”

In other words, a small change at an initial stage in a part of a system can trigger a series of outcomes that drastically effect the final result.

Butterfly Effect – In and Out

In our body, even when one part of our body suffers from some illness, the overall health of the body is affected.

Similarly, our environment is a system. The various aspects of the environment, air, water, land, the flora, the fauna, Nature as a whole, have an intrinsic link. Even if one aspect is affected, the health of the whole environment suffers.

For many years now, man has been ignoring this Butterfly Effect that exists in our Environment and has been disturbing Nature and in the process himself.

Our environment constantly undergoes changes. If we don’t adapt to the environment, the change, then we would be stung by the same changing environment.

Change can be taken in 2 ways.

Change can be seen as a revolution. Change can also be a celebration.

It all lies in the difference between reformation and transformation.

Butterfly flits as a fitting symbol of how we have to work towards transformation.

For, if it were not for Nature wanting to bring us colour and joy through a Butterfly, she would not have worked to bring about a metamorphosis in the drab and heavy caterpillar.

If it were not for this transformation, we would never have seen a “Butterfly”.

The birth of a Butterfly is the story of a change that happens in front of our very own eyes.

Recognizing the profound significance that a mere Butterfly bears on its wings, March 14th has been declared as World Butterfly Day across the world.

It is a story about the power in a Butterfly to transform – itself and us.

It is a story of a transformation from the inside out.

One thought on “World Butterfly Day”