On this day, 7109 years back, King Dasaratha decided to anoint Rama as Yuvaraja, crown prince. The date was 4th January 5089 BCE.

Rama and His brothers were born to King Dasaratha, quite late in life, after much penance, yagna.

When Rama had reached the age to be made the Yuvaraja, crown prince, King Dasaratha, called in his courtiers, to express his intention to crown Rama as the Crown Prince. In these discussions, Dasaratha mentions the month, the planetary positions and expresses concern that they were malefic to him.

Fearing this, King Dasaratha, prefers to anoint Rama as his successor and the Crown Prince, before something befalls him.

While the later events may have proven this fear to be true, the astrological predictions are not the focus here. We would like to see if the planetary configurations mentioned here in the text can help us arrive at the date when the event must have occurred.

King Dasaratha with his Courtiers

“This month of Chaitra is beautiful and holy. The woods and trees are full of flowers. At this time coronation of Rama is most appropriate.”- Ramayana 2.4.21-22

The month is Chaitra. In present understanding, it is the month before the onset of summer. King Dasaratha summons Rama and expresses his intention to Rama.

“Astrologers have told me that my nakshatra has been surrounded by malefic planets like Sun, Mars and Rahu. Under such planetary configurations, the king either dies or falls in some deep conspiracy. Thus, before I face any such problem, you take over the kingship”.- Ramayana 2.4.18

The Rasi, Zodiac sign, for King Dasaratha was Pisces. So, as per this Sloka, Sun, Mars and Rahu node, were in the Pisces constellation, during this conversation.

“Today the moon is on Punarvasu nakshatra and tomorrow it will meet the Pushya nakshatra. In that Pushya nakshatra, I am eager to hand over the kingdom to you.” – Ramayana 2.4.21-22

This indicates that the Moon was transiting from the star Punarvasu to Pushya as part of its monthly 28 day transit from one Zodiac constellation to another.

If we enter these parameters in the planetarium software and look for when this star configuration must have occurred in the sky, then we get to the star chart and the date as, 4th January 5089 BCE.

The elapse time between this date and Rama’s birth is 25 years. So Rama was 25 years when He was sent on exile. This tallies well with the internal textual information of the text.

More on this in our book and film, “Historical Rama”. 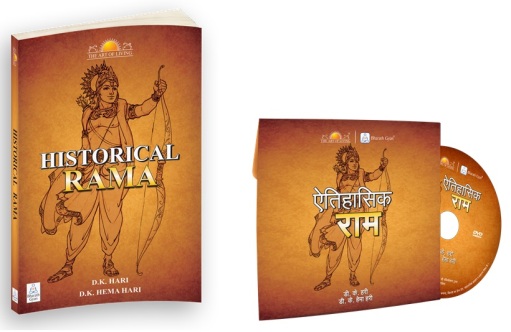