Swami Vivekananda travelled mostly on foot all over India from the Himalayan peaks, through the land, to Kanyakumari, the southeren tip of Indian peninsula, reaching there on 24th December, 1892.

It is for this ceaseless travel that Swami Vivekananda has been respectfully referred to as the ‘Wandering Monk’. He swam across the waters to a large rock, just off the tip of the land, sat there in meditation for 3 days, 24th, 25th and 26th, realized the reasons as to why his mother land, Bharatha Desha which had its days of glory, fallen in his times. 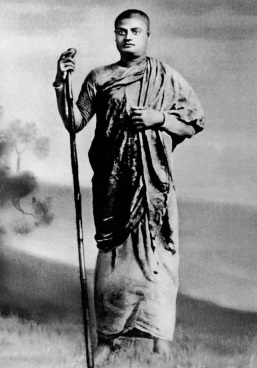 The answer that came to him in meditative state, after his physically observing the length and breadth of the land during his travels, are poignant indeed. Some of the thoughts that came to him which he has expressed in his speeches and works can be assimilated here for our understanding.

This land has Bhog, food prosperity, whereas people had become Bogyam, interested only themselves, their immediate fame and their self-aggrandizement, not giving a thought to the consequences of what it would lead to and who was feeding them this bhogya, and for what purpose.

If somebody is offering you bhogya, food and wealth and other minor worldly pleasures, they are doing so to please you, for, they expect from you to do something to you in return, what you normally would not do. It is selling of one self’s momentary bodily pleasures, pleasures of flesh.

These thoughts that passed through his mind, was the clarity that occurred to Swami Vivekananda.

This was leading to apparent stupidity among people because of their craving. This in turn led to laziness, halasyam. The key people who had the role to be vibrant were put into a stupor.

To do any work successfully against the existing odds, one has to be fearless. This land and its people had the kshatriya bhava, to do things fearlessly. The word kshatriya does not denote only caste. It denotes a state of mind which exhibits fearlessness, a sense of capacity, capability, in trying to achieve ones goal that one has set out to achieve. What Swami Vivekananda saw was that, this innate quality of nirbhayatvam had gone missing from the masses.

In its place, there was a mentality of paying obeisance to the new colonial masters. This nirbhayatvam or kshatriya bhavam is not only to be exhibited in the battlefield, but is that which must exist in our attitude, for, every day is a battle. The land as a whole had slid into divisions.

While, the division of labour and specialization of family skills and helped in the productivity of land through millennia, its stratification and hardening that happened from time to time in the mindset, had created vicissitudes in the very body of the population. This had happened like never before. This aided the divide and rule policy that the colonial masters were quick to seize up for their benefit. These were the 3 key point that Swami felt were the reasons for slide of Indian civilization from its hoary heights. These were the stark point that came to his minds when he swam back on 27th, from the rock in the sea to the mainland, where the Kanyakumari temple stands at the land’s end.

Through times, different sanyasis had meditated on different divinities for boons and or for wellbeing of society. In contrast, Swami Vivekananda meditated on a rock in the sea of Kanyakumari at the foot of the land mass of Bharatha and meditated on the divinity of Bharat Mata, trying to find out the reasons for our slide, how the civilization can once again be rejuvenated for the single-minded effort of his. Swami Vivekananda is commonly referred to as Patriotic Saint. This is not to say that the other saints are not patriotic, but is to empathize that, Swami Vivekananda’s call of patriotism, an analysis stood out in the hour at the time of dire needs.

After the successful visit of Swami Vivekananda to USA, in particular to the Chicago address at the world religions conference on 11th September in 1893, Swami Vivekananda further analyzed the reasons for the decline of the Indian civilization.

In comparison to the American civilization doing well then, India lacked of organizing ability, to perform in a united way.

In stark contrast, he could see this organizing ability and standing united among Americans during his nearly 4 year stay in USA. The other stark aspect that came forth to his mind was that the Indians did not know the greatness of their land.