Tulasi brings in a sense of sanctity, auspiciousness when used in a ritual. Hence this festival is referred to as Tulasi Kalyan, Kalyan meaning, “auspiciousness”. As the word “Kalyan” also refers to Vivah, marriage, the term together with the word “Tulasi”, with some related stories, has come to us today as Tulasi Vivah. This festival is usually observed on the 11th Day after the Full Moon of the bright fortnight of the month of Karthika.

Tulasi is an herb that has been used since time immemorial both in Ayurveda as well as in the religious ceremonies of the land. 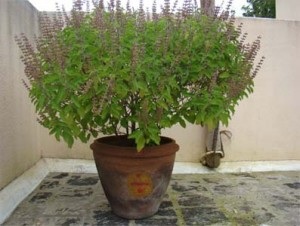 Tulasi has been given a feminine gender in the Indian ethos. Each plant has been given either of the gender depending upon their basic characteristics.

Tulasi is also referred to as Vrinda, Brinda. The forested area of Tulasi plants where Krishna grew up has for this reason been called Vrindavan where it was a thicket of Vrinda shrubs.

It is also called as Basil in English and its Botanical name is “Osmium Sanctum”, the term “sanctum” itself clearly denoting that it is a sanctified plant of this land.

When Victoria Garden and the Albert Zoo were being laid out in India in 1904, the workers suffered high incidences of malaria. It was overcome successfully by developing Tulasi gardens all around the place at the suggestion of a Hindu worker. An infusion of the Tulasi leaves is given in cases of malaria.

In recognition of the wonder, Tulasi plant was declared an anti-malarial in 1907 at the Imperial Malaria Conference.

There are many interesting stories with regard to Tulasi. These bring forth the many values of Lakshmi.

In an interesting episode in the life of Krishna, in a tiff between his two wives, Rukmini and Sathyabhama, Krishna was weighed in all the gold of the land, but all the gold could not outweigh Krishna. The moment a couple of Tulasi leaves were placed, they outweighed Krishna. This story with its symbolic meaning is brought forth in the episode of Krishna Tulabharam.

Among the many varieties of Tulasi, one of the varieties is known as Krishna Tulasi, meaning “the darker colour Tulasi leaf”.

A Herb that removes Dosha

What is more important to be remembered during this festival is the quality of Tulasi as an herb that sanctifies our body and at the same time purges us of Dosha.