A nuclear war looms large, as tensions grow between the major world powers. There is also the danger of the nuclear weapons falling in the hands of terrorists. Will third world war be a nuclear conflict? Do we even understand the adverse consequences that a nuclear war would bring? The fallout of the fallout!

After a high-level meeting on nuclear disarmament on 26th September 2013, the UN General Assembly’s designated 26th September as the International Day for the Total Elimination of Nuclear Weapons. This Day provides an opportunity to highlight the need to eliminate nuclear weapons and the social and economic costs of perpetuating them.

The dropping of the atomic bomb on Nagasaki and Hiroshima during World War II, are the nuclear bomb drops, we have encountered in the modern world till date. Until then, descriptions of such bombs and their destruction were unheard of and would have been passed off as a figment of imagination.

Atomic bombing of Hiroshima and Nagasaki

Did the ancient world and India have the nuclear capability? Were there a nuclear wars in ancient time? Were nuclear arsenal used during the war?

The knowledge about any such war from ancient times will help understand the universal holocaust that a nuclear conflict could bring, and thereby make us more serious about disarmament of these destructive weapons.

Dr. Robert J. Oppenheimer, the nuclear physicist of America, responsible for the development of the first Atomic Bomb in the modern world, while witnessing the first nuclear test explosion in 1945, in New Mexico Desert quoted from the verse 11.32 of the Bhagavad Gita – 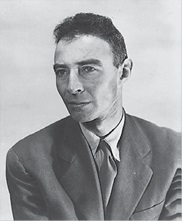 “I am become death, destroyer of the worlds”.

“The Supreme Lord said: I am death, the mighty destroyer of the world, out to

destroy. Even without your participation all the warriors standing arrayed in

the opposing armies shall cease to exist.”

The Upadesa. – Bhagavad Gita, got the Kurukshetra war of Mahabharata underway and this particular phrase which Dr. Oppenheimer quoted, speaks of the power to destroy.

Dr. J. Robert Oppenheimer, director of the Manhattan Project, learned Sanskrit in 1933 and read the Bhagavad Gita in the original. He has cited it as one of the most influential books to shape his philosophy of life. 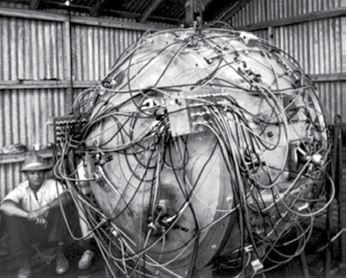 The quoting of the Bhagavad Gita verse 11.32 by Dr. Oppenheimer does not seem to be a one off statement. There are pointers that make one wonder whether Dr. Oppenheimer was quoting the Gita at the moment of the first nuclear test explosion of the modern world, from a philosophical perspective or whether he was perhaps quoting it to imply some other connection or similarity.

Was he of the opinion that the Kurukshetra war of the Mahabharata, which brought forth the Bhagavad Gita, too had nuclear arsenal in it and was he aware of the same?

Dr. Oppenheimer conveys a plausible connection, when he articulates his view on the nuclear capability of an ancient civilization.

Shortly after the first nuclear test explosion, called the Manhattan Project, Dr. Oppenheimer, addressed the students of the Rochester University. Here one of the students asked him a pointed question, if his experiment was the first nuclear explosion of the world. He responded thoughtfully as “Well …. Yes, in modern times ofcourse …”. 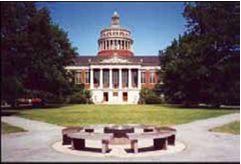 This cautious, measured, response of Dr. Oppenheimer, which has been recorded for posterity, makes one wonder if Dr. Oppenheimer believed that in an earlier civilization, there could have been nuclear capability. By earlier quoting the Bhagavad Gita during the test explosion, was he perhaps pointing to the Indian civilization as having had that capability?

This thought is further substantiated by the Indian text Mahabharata and the adjunct text Purana, which give a vivid description of the Asthra or missiles and their capabilities.

The description of the special manner in which these Asthra were invoked, the number, colour, shape and the rapid speed of individual discharges from each Asthra, the extent of destruction they had caused and the awe in which they were held as compared to the regular bow and arrow, make them appear to be special weapons of mass destruction, beyond our comprehension today.

Were they based on nuclear technology or something even beyond?

It is to be noted from the account in the texts, that not everyone who took part in the war had the Asthra. The common soldier used only Shasthra. Very few persons seemed to have had Asthra.

Notable amongst them, on the Pandava side, Arjuna had such asthra and on the Kaurava side, Karna had them.

Both Arjuna and Karna are described in the text as level headed warriors with great will power, patience, tolerance and sagacity. They had obtained these asthra weapons, only after great penance and austerities.

Is there any ground proof of an atomic war in the past?

All pointers so far, make us ponder if really a limited nuclear war was fought at the Kurukshetra battle. Many have commented for and against on this aspect.

But all studies seem to have halted at a superficial level, leaving this as a still unanswered question.

The maximum one is able to trace, is upto the work by two European researchers David Davenport and Ettore Vincenti, who seem to have done some ground work in and around MohenjoDaro. Not many details can be found of their work or its acceptance, but their findings seem to be very interesting and plausible, warranting further attention.

In one of their excavation sites, they claim to have found evidences that suggest that the ancient town may have been ruined by a powerful blast. 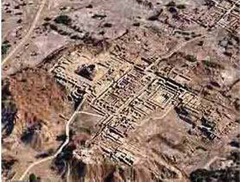 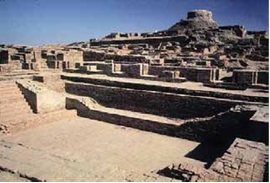 They found big stratums of clay and green glass crystallised, fused or melted at its identified epicentre and bricks around this epicentre were melted on one side, characteristic of an explosion.

It is obvious that not much ground research has been done to validate these statements of the Mahabharata text or that of these 2 research scholars.

There are over 2600 archaeological sites around the Kurukshetra region.

Hardly a handful of them have been excavated and worked on by the Archaeological Survey of India.

Need to check for remnant signs

Just as Archaeo-Astronomy is bringing about a new revolution in history, we need a revolution in our ground Archaeology as well. The services of IAEA (Indian Atomic Energy Agency), the National Physical Laboratory and similar such research institutions with expertise in nuclear sciences and other intra disciplinary subjects, may also have to be enlisted to check for remnant signs of any nuclear explosion in the Kurukshetra war theatre area.

In parallel, if the texts are studied seriously, it can yield a wealth of information on the weaponry, army formations and other details of the Kurukshetra war to give us better insights into this war and the fallout of the war.

A short in the arm to disarm

If it does turn out to be a major war fought with all those advanced technologies, then it is indeed a wake up call for all of us, in this age of nuclear armaments to study and understand this war and draw lessons from it.

It will be a shot in the arm for the nuclear disarmament and global peace program. This is especially because the current generation seems to be slowly forgetting the long lasting impact and sufferings of the people post the bomb droppings at Hiroshima and Nagasaki, having not seen it firsthand.

More on this in our book, “Triple Eclipse”, which can be read online at www.bharathgyan.com 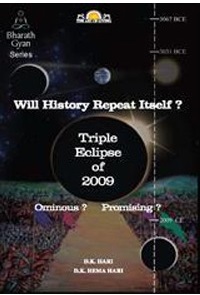