This word “Onam” is the shortened form of Thiruvonam or Shravanam, since this event occurs in the Shravan month under the Shravana star in the Indian calendar.

Shravan is the month in the Indian calendar that typically falls between July-August in North and between August-September in the South. This period is characterized by heavy rains and many other festivals such as Narial Purnima, Raksha Bandhan, Ganesh Chathuthi, Krishna Janmashtami to name a few.

This month is called Shravan since the full moon during this month occurs against the Shravana star.

But why did this particular star get the name Shravana?

Which is this star in the sky?

The 3 footprints in the sky

Before we go to skies, let us recollect the story behind the Onam festival and why it came to be celebrated. How this festival marks the day when Maha Bali, the great Asura king was humbled by Vamana with His 3 giant strides.

The star Shravana is the set of stars known in western astronomy as Altair the bright star in Aquila constellation along with Beta and Gamma Aquilae that flank it on either side. 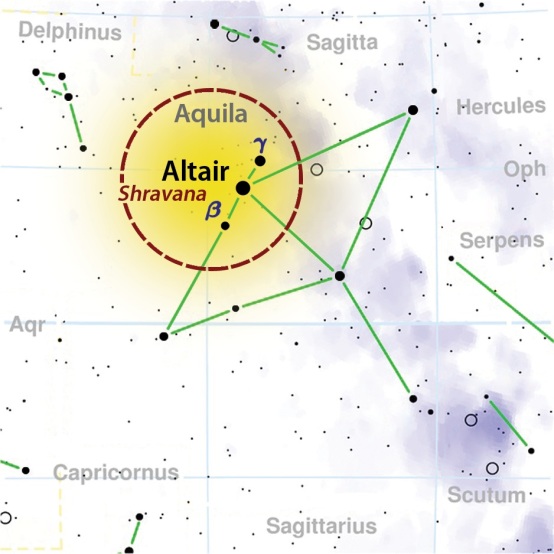 These three stars are pictured as the 3 footprints of Vamana in His gigantic Trivikrama form.

One may wonder what does the legend of Maha Bali and Vamana, have to do with the name Shravana for this star?

The word “Shravana” means to listen, to pay heed to. The legend of Maha Bali from time immemorial has been a moral story on how one should pay heed to one’s mentor, teacher, failing which one could fall into trouble. Hence these 3 stars which depict the outcome of Maha Bali’s disobedience stand as a constant reminder in the sky to caution people to listen and pay heed to good counsel.

Another way in which the name of this star is spelt is, Shrona, which means “lame” or “to limp”, in Samskrt. Shrona is one who limped. Trivikrama after measuring the 2 steps, stood limping, with one leg raised in the air, asking Maha Bali where He could place his foot for the third step?

Trivikrama with one leg up

Hence these 3 stars, as Shrona, also depict the footsteps of Trivikrama as He covered the earth and the skies with His foot.

Another Angle to the Triangle

There is yet another tale associated with how these 3 stars came to be called Shravana.

Much later, closer to the times of Rama, Shravan was a young lad who lived in the time of Dasaratha, father of Rama. He used to dote on his parents and take care of them with love and affection. Since they were old and blind, he would carry them in two baskets hanging on either side from a rod on his shoulders, like a weighing scale, balance.

One day, he was filling a pitcher of water from a pond for his parents. King Dasaratha, out on a hunting trip, mistook the gurgling sound of the pitcher for an animal and shot an arrow in its direction. He rushed to catch his prey but instead found young Shravan Kumar mortally wounded. Even in that state, Shravan requested the king to carry water to his thirsty parents. Dasaratha, approached them with trepidation in his heart and from the sound of his footsteps the old couple realized it was not their son. On being asked, he narrated what had happened. The bereaved father cursed Dasaratha that one day he would also have to bear the sorrow of his son leaving him. Strangely, the king expressed happiness on being cursed because he did not have children at the time and was pining for a child. For the curse to come true, he would have to have children. Just this thought made him so happy, that he took mud and grass from the ground and showered it on his head. As fate would have it through, Dasaratha was later blessed with 4 sons out of whom he loved Rama, the eldest dearly. But when Dasaratha grew old and had pinned his hopes on Rama to take over his kingdom, he was separated from Rama – a separation that took away his life.

Shravan Kumar, even today, is remembered for his dedication towards his parents. Altair in the Aquila constellation, in the sky has been named after Shravan.

Why is Altair equated with Shravana?

Altair, flanked by the two dimmer stars, Beta and Gamma Aquilae gives an impression of a balance, just like how Shravan Kumar carried his aged parents.

What lies in a name?

The ancient astronomers of India had a practice of giving scientific names to stars, names that denote their function, characteristic. Sometimes legends from Purana have been mapped to these objects to symbolically explain scientific principles or facts.

The story of how the Shravana star got its name is just one among many.

Does naming Altair and these 2 dimmer stars as Shravana indicate that the two stars flanking Altair are dying stars while Altair in comparison, a star in the prime phase of its life? This could be a lead for further analysis.

Incidentally Beta Aquila, also known as Tarzed though not very old, has burnt up all its fuel and has entered its dying phase. It has swelled into a giant and is expected to blast and later become a white dwarf.

Delving into understanding the detailed description of Puranic legends in connection with the stars they point to in the skies, could perhaps help provide more clues to understand these stars better.

We will understand why our ancients chose to name the stars what they did?

We will understand our ancients and our heritage better!

Thus concludes the story of Onam from Kerala, to Pathala Loka, to the skies.

2 thoughts on “Onam Festival – Part 4, Story From the Skies”