Vamana Avatar and Mahabali are mentioned in the 13thcentury text Thirunizhalmala praising Lord Vishnu of Aranamula. Even now, the Boat race, and the extravagant feast of Aranmula Parthasarathy temple during Onam is impressive.

Maha Bali, the grandson of Prahalada, was a strong and learned king. The name Bali means strong. Bali was also a person who gave a lot of respect to knowledge. This is evident from the famous episode of his encounter with Vamana.

Maha Bali was performing a Yagna, a focussed and austere act, towards achieving a goal, by sacrificing one’s pleasures and possessions.

At that time, a short, young, radiant boy entered the yagna shala. He seemed to be the epitome of true knowledge. Maha Bali as is the custom, welcomed this radiant youngster and enquired upon the reason as to why he had come to attend this yagna. The youngster requested for just that much space, as could be measured by three of His footsteps. 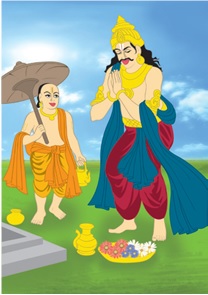 When Maha Bali thinks of this request to be very small for a man of his stature and immediately offers to give the youngster what He desires, Guru Sukracharya, the mentor of Bali and the Asura, intercedes, to restrain the Asura King Bali from granting the requested three measures of space, without giving the request a due thought.

Maha Bali does not pause to think, as cautioned by his mentor Sukracharya. Instead, brushing aside the warnings, he goes ahead and grants three measures of space, as asked for, by this radiant youngster Vamana.

King Maha Bali recognizing the divinity of Vishnu in Vamana, understood his folly, bowed and offered his own head to Vamana, for placing His third step on.

Seeing Maha Bali’s sincerity and reverence, Vishnu forgives him. He sends him “down” to Pathala Loka and offers to stay guard for Maha Bali, Himself.

Acceding to the request of Maha Bali’s people, Vishnu grants Maha Bali permission to return to his kingdom from Pathala Loka, once every year to be in the midst of his people. This day is celebrated as the Onam festival.

Where is this Pathala Loka?

Read the next part in this Onam Series- https://bharathgyanblog.wordpress.com/2019/09/11/onam-festival-part-2-pathala-loka