In the year 1509, on Sri Krishna Jayanthi day, Janamashtami, the birth anniversary of Lord Krishna, Raja Krishnadevaraya ascended the throne of Vijayanagara, a kingdom that reached its zenith during his reign. Vijayanagara was a kingdom that covered the peninsular India with its capital at Hampi.

Under its most famed king, Krishnadevaraya, the kingdom became prosperous and was known for its well administered society. 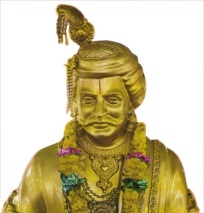 In the year 2009, the 500th year of the Coronation was celebrated at Hampi.

He is one of the greatest kings not only of South India, but of India as well.

In the annals of Indian history, the name of Krishnadevaraya is seen to be on par with great kings like Pulakesin –II, Raja Raja Chola and Samudragupta.

He was the one who kept at bay the Bahmani Sultan of the Deccan, and thereby helped preserve the cultural heritage of this land.

Domingo Paes also speaks about the prosperity of the city of Vijaynagara, namely Hampi.

“The City of Vijayanagara was atleast as large as Rome and was the best provided in the world.”

Nicola Conti, another visitor to India during the reign of Krishnadevaraya, speaks of the extent of the city of Hampi.

Eduardo Barbosa who visited India in 1516 CE, gives a description of Hampi.

From the above descriptions, it becomes clear that Krishnadevaraya was a great administrator, and Vijayanagara Empire had reached its peak under his rule.

Krishnadevaraya was supported by many able ministers.

He had a Prime Minister by name Saluva Timmarusu, who helped the king in all aspects of administration. Krishnadevaraya reverentially called him Appaji, Appa meaning Father. This minister was verily a father figure to the King, and guided him in many respects.

He was the Chanakya of Vijayanagara Empire.

Krishnadevaraya during his rule built, renovated and expanded hundreds of temples all over South India, including the famous Tirumala temple at Tirupati.

Statue of Krishnadevaraya at Tirumala, Tirupati

In those days, the number of courtiers in some of the well-known kingdoms of the land had been 9. As each courtier is a gem in himself, they were collectively referred to as Navaratna or 9 gems.

The court of Krishnadevaraya too had 9 courtiers.

Among the above nine gems, the name of Tenali Raman stands out. Tenali Raman was a Vikata Kavi, a humorous poet and a court jester extraordinaire.

Rulers of yore had realized that all serious matters of court cannot be handled only through serious deliberations. Jest, humour was needed to handle many situations.

Tenali Raman brought in humour to solve serious matters in the Court of Krishnadevaraya, through his humorous poetry.

The episode where Tenali Raman got his boon of humour and poetry from the Divine Mother Kali.

More on this in our book, “Telugu Talli – Her Unknown Side”.

Krishnadevaraya was himself a poet and also encouraged and supported many poets and writers of all languages. His rule saw a plethora of works on Telugu literature, and other languages.

Which is why his reign is also referred to as the Golden Age of Telugu literature.

Krishnadevaraya was a master of many languages such as Telugu, Kannada, Tamil and Samskrt.

His work ‘Amuktamalyada’ is one of the best works in Telugu Literature, which described the story of Andal and Her pangs of separation from Lord Ranganath, an aspect of Narayana, at the temple of Sri Rangam in Tamil Nadu.

He was a man who could wield a pen as well as a sword.