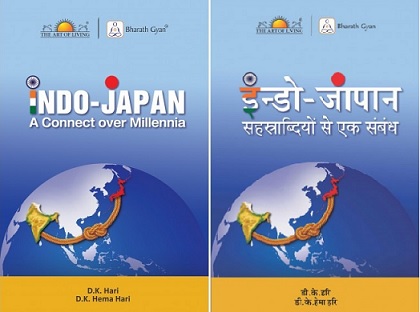 See the complete book at http://www.sattvastore.com

India and Japan are geographically separated by many miles and many seas.

Yet, they have shared a close bond. Not just commercially but in the field of culture, linguistics, spirituality, subtle traditional practices, the religion of Buddhism and many other such areas.

In the last few decades, Japan has had a large impact on Indians by way of infusion of modern Japanese technologies into India. To the current generation of youth in India, the impression is that, Japan has given a lot to India.
“Japan has gained more from India across ages than India has done from Japan in recent times.”

These were the words of Naomi Ishii, MD of Toyota in India.

It was his sincere counter over dinner to the common sentiment prevalent amongst Indians about Japan’s contribution to India.

This was a very touching moment – an endorsement given by a generation of Japanese, to a generation of Indians, of their ancestors’ positive interactions, more than a millennium ago.

In this day and age of high modernization in Japan, if India’s influence on Japan is still held in high esteem by the Japanese and also as one that benefitted Japan, then it speaks highly of,

1.The nobility of the Indian ancestors who had created such an impact on the Japanese and

2. The nobility of the present generation of Japanese to acknowledge such an impact even after millennia.

One is not sure how many of the Japanese or the Indians realize this though. For, Buddhism and its values have been internalized so much that they are an integral part of Japan today. This is evident in the calm demeanour with which they have faced some of the world’s worst disasters, both natural and manmade, through times. This has given them the strength to recover with focus and determination.

The Indo Japan relationship, a rapport built over time, has had various touch points over ages, from different perspectives.

There are many a works that have been written in the last couple of centuries, on these exchanges across ages. Many associations and centres too have sprung up to trace and further the bond between these 2 lands.

In this book, we present the Indo Japan connect right through times with a focus on the subtler aspects of the connect and the way forward than as a historical, political or commercial account.

Nothing about Indo Japan relationship is superficial. The ties run very deep.

The Indo Japan ties are a good example for how a relationship, over a millennium, acquires different flavours, based on mutual sharing of each other’s strengths, which also varies over time.

To remind both Indian and Japanese youth of the strong bond that we have shared over millennia and to strengthen it further for future, by leveraging each other’s strengths in present times, is the objective.