Meaning of the word Krishna

Krishna, the central character to our book, is often in poetry and songs, referred to as Megha Shyama, meaning “dark as the rain bearing cloud”.

There were many a Krishna during Krishna’s time itself.

Three Krishnas at the same Time

There have been many a dark hued persons through the times in this land and since the word “Krishna” denotes dark hued, more than a few of them have been called Krishna.

To avoid confusion, the central character of this book Krishna, the Yadava Prince, is often referred to as “Devakiputra Krishna” meaning “Krishna, the son of Devaki”.

The author of the epic Mahabharata, whom we reverentially call Veda Vyasa, was named Krishna at birth, for he was also dark. He was called Krishna Dwaipayana meaning “Krishna, the island born” as he was born on an island in the middle of a river, to Satyavati who was a boat woman.

Veda Vyasa is a title given to him, as he had also compiled the four Veda and organized them in a format which is in vogue to this day. The word Vyasa means “a compiler”.

Draupadi, the wife of the Pandava princes, was also named Krishnaa at birth. She was also dark hued in colour. 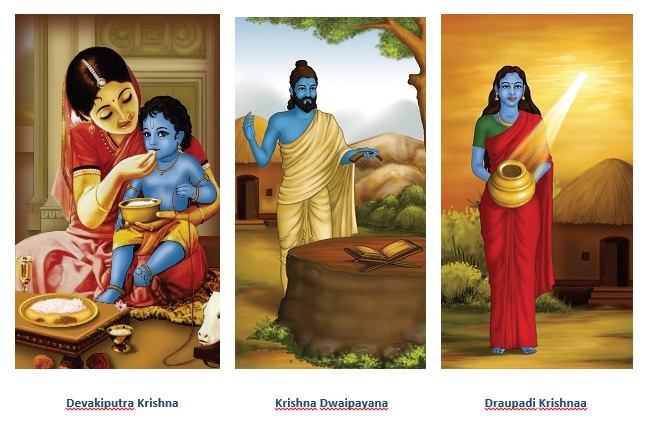 Why only people? Even rivers were named Krishna.

Krishna is the name of a mighty river flowing in Andhra Pradesh. Many think that this river was named after Devakiputra Krishna. But this river is also referred to as the elder sister of Ganga, which means that this river and its name are treated as feminine gender. The original name of this river is actually Krishnaveni, meaning “dark plaited”.

In Samskrt, the word “Neela” is used to denote any dark substance.

In northern parts of India, until a few years ago, the local way of commenting that someone has tanned or become dark, was by using the word “Neela”.

Neela also means “dark blue”. So, in Indian imagery we find the colour dark blue associated with dark and not black. This can be seen in visual representations in the form of a blue coloured Devakiputra Krishna, Draupadi and so on.

It can also be seen from some of the ancillary names given to Krishna such as Neelamegha Shyama, meaning “dark as the dark cloud”.

Usage of the word Krishna

The moon, every month, goes through two cyclical phases of a fortnight each, called Paksha in Samskrt.

The waxing phase, in which the moon grows brighter day by day is called Shukla Paksha. Shukla means “white”, “fair”.

There is an ancient popular phrase – “Krishnamayam Jagat.” This has been simply expressed by those who eulogize Krishna, to say that Lord Krishna fills this entire world, Jagat.

When we look at this same phrase from a scientific level, it offers us a completely new meaning.

Mayam as a suffix, qualifies the word preceding it. Mayam denotes “being possessed of ”, “being encapsulated” in the quality denoted by the preceding word.

Jagat at a basic level means “this world”. It also means “anything that is moving”, “that, which is moving with good speed”, “moving with life”. All these are true for this world. Hence it is called Jagat and also

The universe is also called Jagat, as everything in this universe is also moving. The word Jagannath, Lord of the Universe, Lord of that which is constantly in motion, comes from this word Jagat. It is from Jagannath of Puri and His famous large Rath, chariots, that came the English word “Juggernaut” to denote an overwhelming and moving object or force.

What is further scientifically relevant to us today, from the phrase, Krishnamayam jagat, is that, everything in this universe is encapsulated in darkness. Darkness pervades everywhere.

So this world is indeed prevailing in darkness. Suddenly this phrase Krishnamayam jagat, throws new light.

Is this our own interpretation, taking cue from modern scientific findings and trying to give a new meaning to an old phrase?

Our earlier works Creation – Srishti Vignana and Understanding Shiva, in the Bharath Gyan series, on the traditional description from the Veda and the Purana, on how this Universe was created, show that this meaning of Krishnamayam jagat, does not seem incredulous, but indeed eminently possible.

This universe is indeed Krishnamayam.

More on Krishna and the historicity of Krishna in our book Historical Krishna – Vol-1 – Dating of Krishna.