It was midnight when baby Krishna arrived on earth inside the prison of His wicked uncle Kamsa.

As though aware of the gravity of the situation, the new born baby lay quietly by the side of His mother Devaki. Vasudeva, Krishna’s father, was anxiously shifting his gaze between his newborn son and the prison doors, afraid that the guards may arrive any moment and see the child. To his surprise, he found that the guards had all fallen asleep as though in a state of stupor. The chains at his feet had come loose and the prison doors too had come ajar. He immediately read the signs that he was being shown the way to save his child. He decided to take Krishna and leave Him with his friend Nandagopa on the other side of the Yamuna.

Making haste, he quickly bundled baby Krishna into a basket and walked out of the prison with the child, hoping to make it to his friend Nandagopa’s house and back before daybreak, before the prison guards could find out anything amiss.

It was raining heavily that night and the winds were howling at a feverish pitch. Reaching the banks of the Yamuna, he wondered how he would manage to cross her safely with the child in such weather. Alone, he could have swum across. But he now had a baby.

Yet surprisingly, when he stepped into the waters, he found Yamuna parting and making way for them to cross over. The waters seemed to be leaping, wanting to touch the feet of Krishna but not daring to go any higher.

Krishna being carried by Vasudeva across the Yamuna River in spate

Vasudeva had a feeling that a hooded snake was following him, spreading his hood as an umbrella for Krishna. Overawed, he dared not to turn and look. He kept walking till he reached the other bank. He left Krishna with Nandagopa and returned to the prison just in time before the guards woke up.

Yamuna returned to flowing in her usual manner as though she had seen nothing, she knew nothing and she had done nothing.

If Krishna is historical and not a myth, how can this be explained? Was it a miracle, an exaggeration or an imagination?

The Red Sea Crossing from the Bible

On similar lines, various teams have been working to understand and solve the Biblical mysteries, one of them being the parting of the Red Sea when Moses led his people, the Hebrews, out of Egypt. 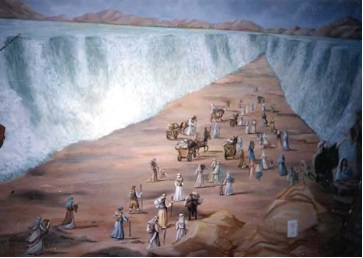 One of the theories that has been put up to explain this as a natural, but rare phenomenon, is based on the principle of Wind Set Down.

A Wind Set Down

One of the experts who has been working on this theory, is scientist Prof. Doran Nof, Oceanography Department, Florida State University.

According to the Wind Set Down theory, when winds blow continuously for a sustained duration, from the shores of a water body, towards the inside of the water body, at speeds around 100 mph and if the water depths happen to be shallow in that region, the winds can succeed in pushing the waters further inside, away from the shore.

If the land under the water body also contains undulating ridges, then the receding waters could get contained within the troughs and can create stretches of dry areas within the water body, especially on top of the ridges.

Once the winds die down, the waters will gush back into that land at a much higher speed.

The time period for the event of the Red Sea crossing is estimated to have been around 1500 BCE.

Based on this Wind Set Down theory, the sea levels then, the Biblical descriptions and other logical analysis, Prof. Nof and Nathan Paldor of the Institute of Earth Science at the Hebrew University of Jerusalem have identified the route that must have been taken by Moses. They have zeroed in on the place where Moses must have crossed the Red Sea safely and how once the winds died down, all the soldiers of the Pharoah would have got trapped and drowned by the parted waters gushing back.

Similarly on the night of Krishna’s birth, there was heavy rain, accompanied by gusty winds, thunder and lightning. The Yamuna was also in spate. The gusty winds accompanied by the other conditions described, could well have been an ideal condition for a ‘wind set down’ phenomenon to have occurred there in the Yamuna river too making it possible for Vasudeva to carry the just born Krishna, in a basket, and walk across the Yamuna.

Yamuna, a smaller river then

It is to be borne in mind that Yamuna was a smaller and shallower river then. Sarasvati was a much larger, flowing river then.

Tamas was then a tributary of the Sarasvati, before it turned east to join the Yamuna much later in time.

Even now in the Mathura Agra belt, Yamuna is a shallow river. This is noticeable before summer, when the water is lowest in the river. It is sometimes easy to ford the river then, on foot.

Krishna is eulogized for the miracles He performed during His childhood as well as later in life. The list is long and the parting of the Yamuna is one of the first few miracles to find place in this list.

From the Red Sea parting study, we see that the parting of Yamuna too has a scientific explanation.

It is possible that over time, with increasing popularity of Krishna as divine, some incidents could have found their way into the epic or other allied texts, legends and practices of the land, in the form of miracles to convey awe of the divine.

It is also possible that over time, in future, as science advances, it could stretch into understanding some of the subtler aspects as well. This in turn could lead to a better understanding of Krishna’s miracles, acts.

Time alone can tell what will happen!

(The above is an extract from our book – “Historical Krishna”)

2 thoughts on “Parting of Yamuna – A Miracle?”