Narmada is one of the 3 main rivers in India that flows westwards into the Arabian Sea, the other two being Tapti and Mahi. It is the fifth largest river in the Indian sub-continent and the third largest of the rivers flowing entirely within India.

Narmada has its source at the Narmada Kund of the Amarkantak Plateau of the Bilaspur district of Chhattisgarh, and flows through Madhya Pradesh, Maharashtra and Gujarat. The river flows for 1300 kms, before draining into Arabian Sea.

One of the specialties of this river is that it flows through a rift valley, between the Vindhya and Satpura range. It is also one of those major rivers that doesn’t form any delta.

Narmada means “that which gives pleasure”. It is also known as Rewa, meaning, “swift”, due to the swiftness of its water currents.

Adi Shankara once calmed the raging waters of Narmada River, using his kamandalu, to save his Guru Govinda Bhagavatpada, who was immersed in dhyana, meditation at a cave nearby.

Adi Shankara glorifies Narmada in the Narmada Ashtakam, which he composed in the glory of Narmada Devi. The opening verse of this hymn reads,

Salutations to Devi Narmada whose River-body illumined with Sacred drops of Water, flows with mischievous playfulness, bending with Waves.

Your Sacred Water has the divine power to transform those who are prone to Hatred, the Hatred born of Sins,

You put an end to the fear of the messenger of Death by giving Your protective Armour (of Refuge),
O Devi Narmada, I Bow down to Your Lotus Feet, Please give me Your Refuge.

In Purana, Narmada is mentioned as the daughter of Rishi Mekla, who lived and meditated at the foothills of Vindhya Mountains. Hence Narmada also has the name Mekalaa and Mekalakanya. There are other legends which point to Mekala being the mountain from where Narmada rises.

The river is today known as the “life line of Madhya Pradesh” on account of its major contribution to the state.

One of the 7 holy rivers

In the Indian tradition, Narmada is of the 7 holy rivers, the others being Ganga, Yamuna, Sindhu, Kaveri, Sarasvati and Godavari. The ancient Indian texts like the Ramayana, Mahabharata and the Purana talk about this river. Like the Ganga, river Narmada is worshipped as a deity – Narmada Devi. The Vayu and Skanda Purana speak about the origin of this river in detail.

The connect with the Trinity

As per one legend, Narmada has her origin from the sweat of Lord Shiva, and is therefore also known as Shankari. Another legend states that the river was born from the tear drop of Lord Brahma. These legends also state that Narmada is older than the Ganga.

The Omkareshwar Jyothirlinga is located on the banks of Narmada River, at the Khandava district of Madhya Pradesh.

The resting place of Lord Shiva

Padma Purana states that Lord Shiva rested on the banks of River Narmada, before proceeding on his mission of vanquishing the Tripuras, the three aerial cities of the Asuras. The pebbles on the banks of Narmada are thus regarded to be highly sacred and are worshipped as lingam. These pebbled are known as Banalinga and are sought after for worship.

One of the biggest of these Banalinga has been installed in the Brihadeeshvara temple, at Tanjavur in Tamil Nadu.

The battleground of Indra and Vrtra

The Bhagavata Purana states that the battle between Indra and Vrtra, happened on the banks of Narmada River.

In the Ramayana, it is mentioned that King Kartivirya Arjuna once picnicked with his wives on the banks of Narmada. Ravana also comes here at the same time, and in a battle between Ravana and Kartivirya, the former is humbled.

In the search for Sita, Sugreeva asks his Vanara army to conduct a search amongst the Vindhya mountains, where the Narmada river flows.

A Shiva temple with Narmada as Shakti

A Shiva temple exists on the banks of River Narmada, with Narmada as consort. Devi Narmada is worshipped as Shakti in this temple. 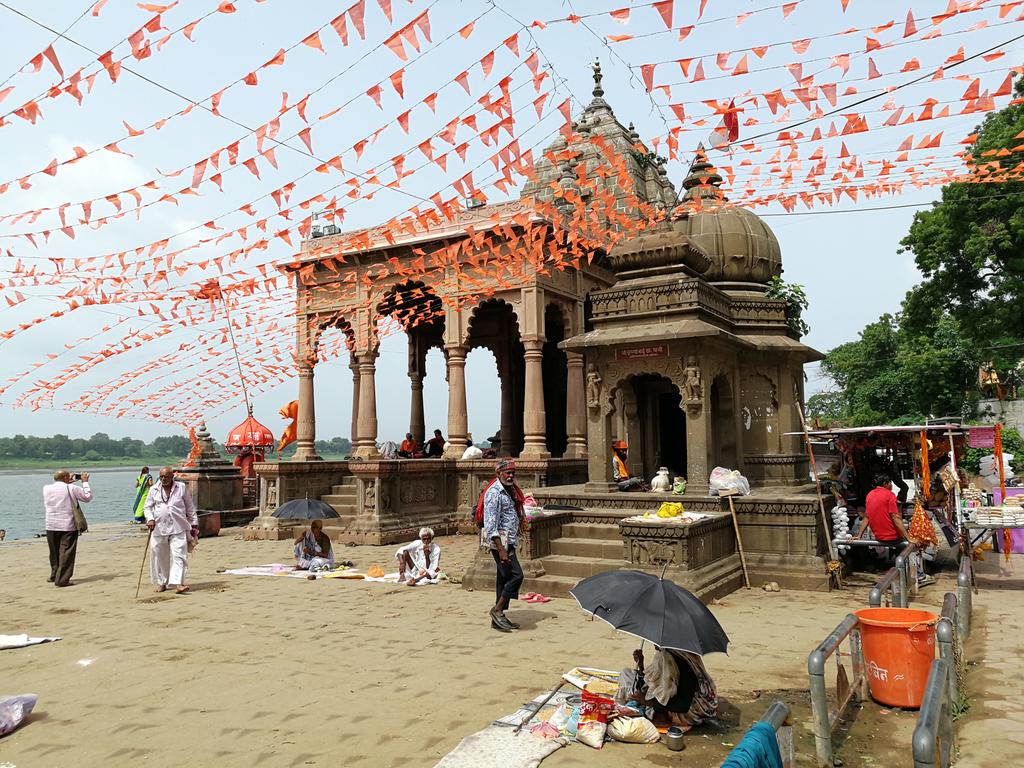 A festival, Narmada Pushakaram is held every 12 years here, in worship of River Narmada, and lasts for 12 days.

The Narmada basin covers a large area and is located between Vindhya and Satpura ranges, in the states of Madhya Pradesh, Gujarat, Chhattisgarh and Maharashtra and Telangana. It has one of the oldest teak hardwood forest in India. The Narmada eco region is home to 76 species of mammals and 276 species of birds.

The Bhimbetka rock shelters in the Narmada valley, in Madhya Pradesh contain many ancient paintings, that are 30000 years old. These 243 rock shelters at Bhimbetka have been declared as World Heritage Site by the UNESCO.

Archaeologist have found evidence of Harappa settlements on the banks of Narmada. One of the excavated sites is located at Navadatoli on the south bank of the river, which has remnants of the earlier civilization. Another one was excavated at Mehtakhedi village, in Narmada Valley, Madhya Pradesh.

Bharuch is a sacred city located on the mouth of Narmada, and its name is derived from the great Rishi Brigu, the city’s original name being Brigukaccha. Rishi Brigu’s ashram was located on the banks of river Narmada.

As per the Purana, Rishi Brigu is one of the ten sons of Lord Brahma. Many Rishi like Markandeya, Shukracharya, Jamadagni belonged to the lineage of Rishi Brigu. Lord Parasurama was born in the 7th generation this Rishi.

As per the Skanda Purana, 55 tirtha Sthal, are located along the Narmada River. Bharuch is also a Jain tirtha Sthal.

Across times, people have paid their respects to the Narmada River and the Tirtha Sthal on its banks by keeping alive the tradition of Narmada Parikrama, which is a circumambulation of this river. A 2600 kms long journey, this pilgrimage was traditionally done on foot over 4 months and in recent times is also accomplished by some, using road transport in 2 to 4 weeks. For people hailing around this region, completing atleast one such Parikrama  in their lifetime, is their cherished goal. Integrated into the cultural tradition of Tirth Yatra in India, this Parikrama shows how people have revered the Divine in water, with water and for water to live.

Today, just like other rivers, pollution has affected Narmada. On December 11th, 2016, the Madhya Pradesh government launched the Narmada Seva Yatra to turn the river pollution free. It sought to create awareness about the conservation of the river.

Narmada is one of the major rivers in this country that has shaped the culture and tradition of this civilization, apart from support life for many a millennia. We need to preserve it, so that it continues to sanctify us for many more millennia.